Published By Gabcos - November 14, 2016
Abubakar Shekau, the leader of the Nigerian jihadist
group Boko Haram, has reacted to the election of
Donald Trump as the United States president. In an audio message published on the group’s
YouTube page on Sunday night, November 13, Shekau
said they will “not be fooled by people like Donald
Trump or anyone in the coalition who is fighting our
brothers in Iraq, Syria, Afghanistan or anywhere
else.” 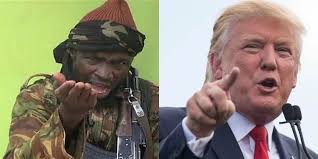 The Boko Haram leader warned that the war has just
begun, The Punch reports.
He said in Hausa language: “We are done with
Obama, now we’re going to start with Trump. We
remain steadfast by our faith and we will not stop. For
us, the war has just begun.”

Although, the IS high command said in August that Shekau had been replaced as leader by Abu Musab al-
Barnawi, the 22-year-old son of Boko Haram’s founder
Mohammed Yusuf, he (Shekau) still claims he is in
charge. Exactly a month ago, the jihadist group released 2 1 out of the over 200 kidnapped school girls from Chibok after negotiations with the Nigerian government. Over 20,000 people have died and 2.6 million
displaced since 2009 when Abubakar Shekau took
over as the head of Boko Haram.