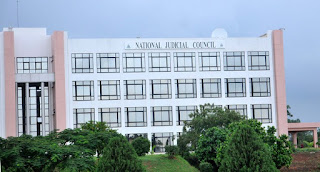 The NJC had initially refused to suspend the judges despite public pressure, saying the allegations against them had not been substantiated.

It however said the judges had voluntarily stepped down from court sittings.
The latest decision came after the council’s 7th meeting between Wednesday and Thursday.
A communique issued at the end of the meeting, and signed by NJC’s Director of Information, Soji Oye, said the decision was taken to avoid allowing persons under investigation to to partake in presiding over judicial matters at the same time.

“Council also decided that Judicial Officers shall not be standing trial for alleged corruption related offences and be performing judicial functions at the same time,” the communique said. “Council however decided that it will ensure that Judicial Officers who are being investigated for alleged high profile criminal offences do not perform judicial functions until their cases are concluded.”

The judges were arrested on October 7.