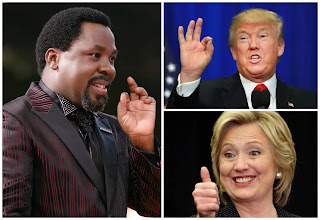 TB Joshua, who has successfully predicted major world events and incidents, did not mention any particular name but said he saw a woman as the winner of the election.

If that is the case therefore, it means Hillary is the predicted winner of the election and successor to Barack Obama, who is leaving the seat after two terms as president.
The revered prophet made his prediction on the church’s official Facebook wall.
“Ten days ago, I saw the new president of America with a narrow win. The new Ppesident will be facing several challenges over many issues, including: passing bills, attempts to possibly pass a vote of no confidence on the new president. The boat of the new president will be rocked.
“By the way, in order not to keep you in suspense, what I frankly saw is a woman,” he predicted.