Published By Gabcos - November 14, 2016
Governor Ayodele Fayose has revealed that he is
spending the entire Monday, November 14, fasting
and praying to God to make Nigeria great again. Fayose said this in a speech to mark his 56th birthday
saying he was not celebrating it because the situation
of the country did not warrant it. 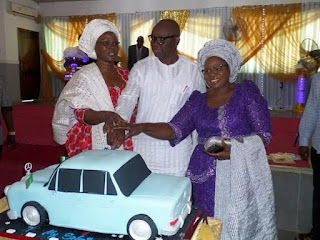 The governor, a notable critic of the Muhammadu
Buhari government, also hit at the administration
saying it is doing everything to stifle opposition. “I dedicate this birthday to the desperately poor, the
poor, and the once vibrant middle class Nigerians that
have now been reduced to an unprecedented level of
marginalisation, untold suffering and virtual
nothingness. “I use this occasion to solidarise with our people
who are suffering and lacking the basic necessities of
life at a level never seen before in this country, a
situation that has been due largely to the
incompetence of the APC-led federal government.
“Celebrating today will be meaningless, considering
the plight of Nigerians and the bare-faced deceit of the
people by those who promised them better life. “It will make no meaning for me to be celebrating
birthday in the face of the muzzling, arm-twisting,
ridiculing and blackmailing of the judiciary, legislature
and the opposition in the name of anti-corruption
war,” he said. Fayose said further: “When a democratically elected
government embarks on a systematic efforts to kill
the opposition, legislature and subjugate the judiciary,
it is no time for lovers of democracy like myself to
pick samba and tambourine to celebrate birthday.”
The governor said rather than wine and dine, which,
usually, is the hallmark of birthday celebrations, he
would “spend today, fasting, meditating and praying
to God that He should graciously and mercifully
intervene in the affairs of our great country, Nigeria,
which, regrettably, has been laid prostrate by this clueless, fumbling and wobbling administration.” He said Nigeria was facing unusual times, adding that
he was in solidarity with the suffering people of
Nigeria. He promised to always be there for the suffering
masses, adding that he remains their mouthpiece. “I pitch my tent with you, I stand with you, by you,
and for you. I shall never be tired of speaking for you. “When they call me the unofficial leader of
opposition, they, in their own warped understanding
and pervert thinking, seek to disparage me. “I, however, consider it a mark of honour for me to
be the recognised mouthpiece of the suffering
Nigerians. I accept this title as a great privilege and
call to duty, which I considered sacred,” he said. He said he was rededicating himself to his God-
assigned duty and responsibility with unwavering
commitment and renewed strength, vigour, and
vitality.
He said: “I say to the people of Nigeria, we shall be
great again. These perilous times shall pass and
together, we shall bring back the glory and greatness
of our country and people. “Together, we shall take back our country from the
wanton troopers riding roughshod over it at the
moment, God with us. I shall never let you down.”