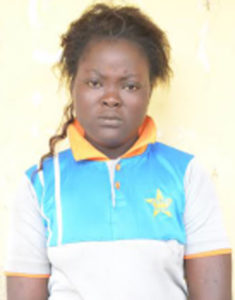 The Ogun State Police Command has arrested a 23-year-old lady, Abosede Omolare, for allegedly stabbing her fiance, Sadiq Dauda, to death during an argument.
The Command’s Public Relations Officer, Mr. Abimbola Oyeyemi, told a news conference on Friday in Abeokuta that Omolare was engaged to marry Dauda in December.

He said that the suspect committed the crime at Onirugba St. in Ijebu-Ode on Tuesday and was arrested on the same day.

The PPRO explained that the incident followed minor disagreement over allegation of mismanagement of funds from the gas business which the late Dauda entrusted to the suspect.

Oyeyemi said Oyelare claimed that her late fiancé, who she was living with, beat her up and sent her away.

He said that Oyelare returned home on the invitation of her fiance’s mother who promised to intervene.

He said “She stated that immediately she got home, her fiance descend on her, beat her mercilessly and broke a bottle with which he threatened to stab her.
“She admitted that it was then she took a kitchen knife and stabbed him on the rib.”

Oyeyemi said that Dauda, who was bleeding profusely, was carried to Igbeba Divisional Police Post in Ijebu-Ode.

He added that policemen rushed him to Ijebu-Ode General Hospital where he died on Wednesday.

The PPRO said the case had been transferred to the Homicide section of the State Criminal Investigation and Intelligent Department for further investigation.
(NAN)