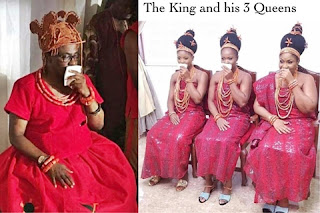 
The photo below of the newly coronated Oba puzzled many people. 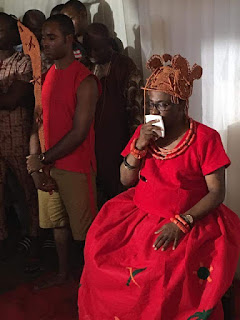 Why was the Oba covering his mouth? It was obviously a cultural act but what was the significance? Even his wives covered their mouths.

I did some investigation and found out the following:

The Oba usually covers his mouth because when he talks he is the supreme authority. Whatever he says is final.

People talk on his behalf most of the time and whatever they proclaim becomes the Law with immediate effect.

A friend of mine who is a painter said he did a painting of the old Oba and it was rejected because it depicted him smiling. According to tradition, people are not supposed to see the Oba's teeth so he doesn't smile.

His wives covered their mouths as a sign of submission.

Don't you just love our culture? So rich and varied!

If I have any fact wrong, please clarify.