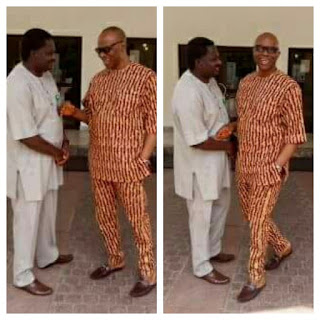 Governor Mimiko arrived the president's office at about 11.00am.

It was gathered that Mimiko visited the Presidential Villa in respect of the Thursday's declaration by the Independent National Electoral Commission of Jimoh Ibrahim as the candidate of the People's Democratic Party (PDP) in the Ondo governorship election.

The INEC had removed the name of Eyitayo Jegede from the list of the candidates of the political parties that would participate in the November 26 governorship election and replaced it with Ibrahim.


The Governor Olusegun Mimiko has alerted President Muhammadu Buhari of the potential danger of the declaration of Jimoh Ibrahim as PDP candidate in the forthcoming gubernatorial election in the state.
The Independent National Electoral Commission had on Thursday removed the name of Eyitayo Jegede of the PDP from the list of the candidates of the political parties that would participate in the November 26 governorship election and replaced it Ibrahim's.

The governor told State House reporters today shortly after meeting behind closed-doors with Buhari that the INEC's action could cause a conflagration in the state.

The governor said there was no moral justification for what the INEC did describing Ibrahim's declaration as injustice and mischief.

Mimiko said President Buhari promised him that he would look into the matter.