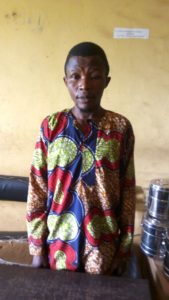 The police in Ogun have arrested a 37-year-old man, Rasak Adekoya for allegedly beating his son to death.


Adekoya was apprehended by policemen at Ago-Iwoye after residents reported him for severely beating the deceased, Wariz Adekoya, 10.

He was said to have descended on the boy on the allegation that he stole from him.
It was gathered that the suspect always assaulted the child, a situation that infuriated his neighbours.

The Nation gathered that old and new scars were seen all over the deceased.

Contacted, the command’s spokesman, Abimbola Oyeyemi, an Assistant Superintendent of Police (ASP) said the corpse has been deposited in the mortuary.

“The corpse has been deposited at St. Joseph Catholic Hospital Mortuary, Oke-Agbo, Ijebu-Igbo for autopsy. The Commissioner of Police, CP Ahmed Iliyasu has ordered that the suspect be transferred to Homicide Section of the Criminal Investigation and Intelligence Department (SCIID), Eleweran, for further investigation.

As soon as investigation is concluded, the suspect would be arraigned in court.”