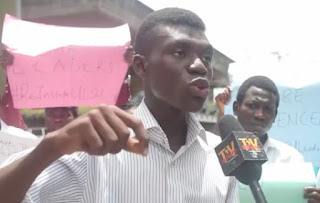 The University does not wish to trade issues with a rusticated student. However, it isimportant to reiterate that all the rusticated students (including Mr. Olorunfemi Adeyeye) were not victimized because of their involvement in the protest…

Mr. Olorunfemi Adeyeye in particular was specifically found to have breached the Social Misconducts and Penalties Regulations of University of Lagos as clearly stated on page 101 of “University of Lagos, 2015-2016, Students Information Handbook’, item 8 captioned CYBER OFFENSE OF ANY NATURE (Internet Scam, Posting nude pictures on internet, Unauthorized use of the University’s name, logo, etc. in a manner that will bring the University to disrepute:”) which carries a penalty of EXPULSION.

It is worrisome that the public is being made to believe that a student who insulted and abused all lecturers, who wrote that lecturers resisted the renaming of the University because it gives them leverage to have sex with female students should be promoted as a RADICAL and a REVOLUTIONIST.
A student who avers that the First Class Honors degree in Chemical Engineering obtained by the Vice-Chancellor in 1974 from the University of Ife (now Obafemi Awolowo University, Ile Ife) is a waste. Our University is committed to awarding its certificates not only for learning but for character as well.
Over 7,000 Degree and Diploma certificates duly signed by the Vice-Chancellor and Registrar of the University are awarded every year.
It is therefore surprising, that someone expecting to receive one of such certificates would cast aspersions on the academic integrity and  entire learning processes of the University.
Mr. Adeyeye’s Recent Arrest on September 21, 2016.

Our attention was drawn to the recent arrest of Mr. Olorunfemi Adeyeye who organized a group of boys  in spite of the rules/regulations governing the conduct of rusticated students, to cause chaos and commotion at the University gate.
His subsequent arrest along with other non-students of the University (two of whom are current serving youth corpers "NYS) was not connected with any protest.
It was a consequence of his desperate attempt to attract cheap publicity, unearned public sympathy and continuously bring the name of the University into disrepute.
It should be reiterated that the earlier misdemeanor of Mr. Olorunfemi Adeyeye attracted EXPULSION. The University Senate in tempering justice with mercy handed him a 4-Semester Rustication.
His recent conduct will do him no good.
We wish to appreciate the Media houses that have professionally and objectively disseminated issues concerning the University of Lagos.
The University hereby reiterates its commitment to the production of total graduates who exhibit excellence in learning and character.