Pastor Loses Consciousness And Got Stuck While Destroying A Shrine In Ogun State. - Police To Arrest Him. 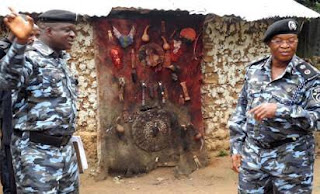 A Man identified as Pastor Wale Fagbere, has got stuck in a shrine in Ketu community in Ayetoro area of Yewa North local government, Ogun State, while trying to destroy the traditional worshipers’ items.

#KinGabcosPress gathered that, the pastor, whose church could not be ascertained as of the time of this report, lost consciousness in the shrine.

Pastor Fagbere was reported to have earlier told his church congregation that, he had been directed by God to destroy all the shrines in Ketu community.
While he was making an attempt to destroy the shrine, it boomeranged as he got stuck in the place, prompting the residents to raise the alarm.

Our Further findings made it clear to us that, the priests in charge of the shrine insisted that until they performed some ritual on Fagbere, he could not be let off the hook.

We also gathered that, intervention of the Alaye of Ayetoro, Oba Abdulaziz Adelakun, saved the cleric as he was treated by the priests before he regained consciousness.

The Public Relations Officer For The Ogun State Police, Abimbola Oyeyemi, who confirmed the incident, said the man might be charged for malicious damage and sacrilege.

According to him, “The police got the report in Ayetoro that one Evangelist Wale Fagbere went to Ketu to destroy a shrine. After the destruction, the man became unconscious...When we visited the place, the traditionalists claimed that the subject could not be taken away until some spiritual exercise had been performed...The Alaye of Ayetoro, Oba AbdulAzeez Adelakun, waded into the matter which led to the release of the man...The victim has been revived and he has been handed over to his family for more spiritual cleansing”.

When asked who the police would charge, if it was the traditionalists or the victim, the PPRO said, the Pastor would be charged for sacrilege and malicious damage after he gets well.

He said the next step of the police would be determined by the traditionalists lodging of a complaint against the pastor. “Everybody has right to worship anything he so desires”, Oyeyemi said.