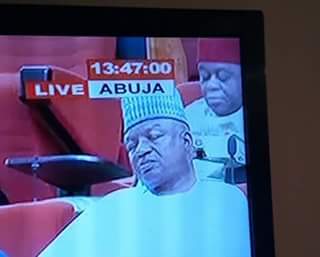 The people of southern Kaduna said, they will start the process of recalling back their sleeping Senator Danjuma Laah by next week.
The source, which pleaded anonymity told Facebook journalist - Mustapha YaMusa Rigasa that it has became necessary for them to recall back Senator Danjuma, due to his bad representation, absenteeism, over sleeping, lack of contribution and his failure to sponsor a single bill that will protect the entire southern kaduna zone from attack and earthquake.

The source also categorically told Mustapha Yamusa Yamusa Rigasa that Senator Laah will be replaced by a patriotic and vibrant person from southern kaduna who is ready to give a good and qualitative representation to the entire southern kaduna senatorial zone, especially Sanga local government where the people of NUMANA and other tribe were being killed by unknown gunmen without taking any lasting solutions and action from the federal government.
According to the source, "The only solution left for southern kaduna is to recall back their sleeping and absentee senator and replace with the good and patriotic person."