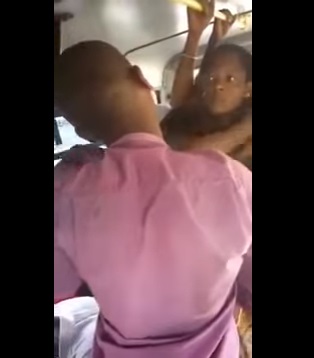 A sexually thirsty man has caused drama in a Kenyan luxurious bus popularly known as  "Matatu", after he grinded his manhood on a woman’s big behind and messed up on her dress.

The man was sexually starved and couldn’t hold his urge, According to witnesses, While the man stood behind the woman in the overcrowded bus, he stylishly grinded his erected joystick on the woman’s booty hoping to quench his thirst, but he lost control and popped his "Champagne" on the woman’s body.
He ended up regretting after the woman embarrassed him in front of other passengers. Some of the passengers could be heard in the video saying he should be taken to the police station while others insisted he should buy her a new dress first.

Below is a video clip of the incidence, Lwkmd!