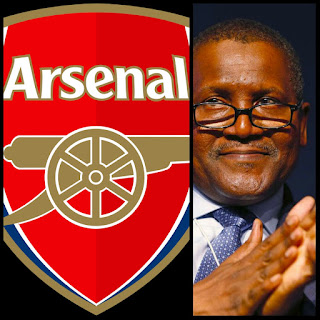 Africa’s richest man,  Alhaji Aliko Dangote has clearly re-stated his plans to buy London-based professional football club "Arsenal Football Club" , in four years time. In an interview with Bloomberg TV in New York on Wednesday 21st day of September 2016, Dangote stated that there is no doubt he will buy Arsenal and it’s not a problem of money.
According to him, “Maybe three to four years. The issue is that, we have more challenging headwinds. I need to get those ones out of the way first and start having tailwinds. Then I’ll focus on this.”

The Billionaire, reportedly worth around £8.3billion, announced his intention to buy Arsenal last year. But he needs to improve his business prospects and investments in gas pipelines/oil refinery and pay off before making the expensive acquisition.
“It’s not about buying Arsenal and just continuing with business as usual, It’s about buying Arsenal and turning it around. I’ve run a very successful business and I think I can also run a very successful team. Right now, with what we’re facing, over $20 billion of projects, I cannot do both." he added.