Court Remands Runaway Suspected Cultist, And Three Others In Prison Over Alleged Murder. 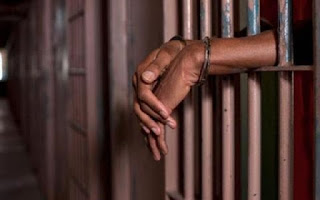 A Magistrate court sitting in Aladja community of Udu Local Government Area of Delta State today remanded a runaway suspected cultists, Jude Okakotu together with three others in prison custody.
Jude Okakotu, a member of the IJB Confraternity was remanded by Senior Magistrate on Grade I, Magistrate J.E. Uyokpeyi along side three others, Brume Monday,  Otive Aforhon and Tega Morgan who are suspected members of  Dominion, Vikings and Blue Spies respectively on five count charges bordering on alleged murder,  cultism, disturbing of public peace, unlawful possession of fire arms, as well as constituting public nuisance.
#KinGabCosPress gathered that the suspected cultists were allegedly responsible for the murder of one Ikechukwu Obi owing to a battle of territorial supremacy between two rival cult groups, Vikings and Dominion  in Aladja Community.
Our Correspondent can report that it was during a rival cult clash that the deceased was allegedly shot dead by the police and Aladja Community Vigilante on September 4, before they arrested Otive Aforhon,  Brume Monday and Tega Morgan on September 5 while others including Jude Okakotu deserted the area before he was arrested and arraigned in court today by Police Prosecutor, Sergeant Money-Girl Omoniyi.
The cult groups took advantage of the existing crisis between Ogbe-Ijoh and Aladja Communities to terrorize, maim and dispossess residents of their personal effects.