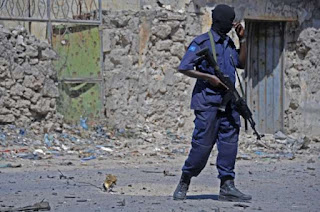 Islamist gunmen launched an overnight attack on a police camp in Kenya’s north-east near the Somali border, The Kenyan Police said on Thursday, adding that one assailant died and an officer was hit by gunfire.
“Over 50 terrorists attacked the police patrol base in two Land Cruisers but the officers in the camp managed to repulse them amid a fierce exchange of gunfire,” Kenya police spokesman George Kinoti said in a statement.
The raid on the police post in the town of Liboi began shortly after midnight.
Kinoti said the attackers were initially repulsed but “later returned in a bigger number”.
One of the assailants was killed and several seriously injured, he said.
Kinoti added that one police officer who suffered gunshot wounds was airlifted to a hospital in the capital Nairobi, while three others who sustained light injuries were being treated in nearby Dadaab.
The Shabaab, an al-Qaeda linked militant group headquartered in Somalia, claimed the attack, which coincided with the third anniversary of the assault on Nairobi’s West gate shopping mall in which at least 67 people were killed.
In a statement, the Shabaab claimed it had killed at least six police officers, seized weapons and vehicles, and abducted two police officers.
Kinoti said, all “except two” officers had been accounted for.
Shabaab is fighting to overthrow the internationally-backed government in Mogadishu, Somalia, but also carries out regular deadly attacks in Kenya, including in April 2015 when gunmen killed 148 people, mostly students, at a university in Garissa town.