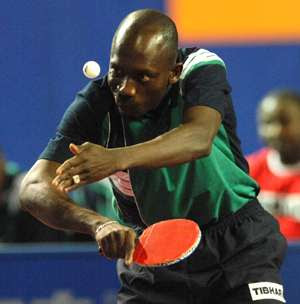 Despite his exit from the table tennis
men's singles event of the ongoing Rio
2016, the International Table Tennis
Federation (ITTF) plans to organise a
ceremony in Rio to honour Segun
Toriola, for his Olympic feat after making his seventh appearance at the
Games, being the first African to
achieve the feat.
This was revealed in a press release by
ITTF Africa.
Toriola's participation at the ongoing Rio 2016 Olympic Games came to an
end on Sunday August 7 after he was
edged out by Japan’s Niwa Koki in the
men’s singles event of table tennis.
Toriola who is ranked 120 in the
world, had on Saturday beaten Czech Republic’s Dimitrij Prokopcov in the
first round.
The 41-year-old made his debut at the
Games in 1992 in Barcelona.
His best ever performance at the
Games was in Beijing 2008 where he got to the quarter-finals.