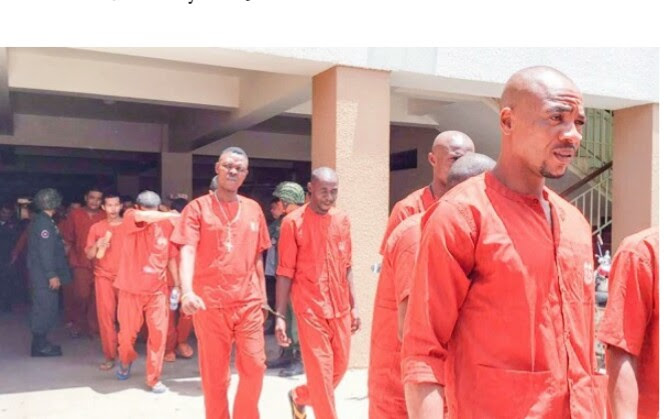 Srey Makny, a substitute prosecutor at
the Phnom Penh Municipal Court, said
the eight, along with one Cambodian
woman, were arrested after police
caught the group allegedly trafficking
one kilogram of crystal methamphetamine in Phnom Penh’s
Chamkarmon district in January 2015.
Presiding Judge Khy Chhay named the
nine on trial as Okorom Nhabu Favor,
36, Izuchukwu Chuwuma, 40,
Nnamezie Victor, 30, Simon Maduka Ukadu, 45, Sunday Nwabusi, 31,
Okorom Kizito Chimedu, 35, Francis
Nnamedi, 30, Tony Mmaduka
Chuwuonye, 34, and Morn Vinyung,
31.
They were all charged under article 40 of the Drug Law.
Despite an admission of guilt from Ms.
Vinyung, Mr. Chuwuonye’s girlfriend
at the time of their arrest, all eight men
denied the charges against them,
saying they were Christian missionaries who came to Phnom
Penh to open a church.
Captain Proeung Pheap, deputy chief
of the Anti-Drug Unit at the 9th
Intervention Police Office in the
Ministry of Interior’s anti-drug department, said the group was using
their Mountain of Fire and Miracles
Ministries church as a front for a drug
ring, hiding their identities and
trafficking under the guise of
missionary work. He claimed police discovered the illegal
operation after Ms. Vinyung delivered
drugs to undercover officers three
separate times at the Sovanna
supermarket in Chamkarmon district
in January 2015. “Among these nine accused people,
Morn Vinyung and Francis Nnamedi
were arrested after they brought a
package of drugs for sale to our
undercover officer,” he said. “The
other accused people were later arrested based on the answers of
Morn Vinyung and Francis Nnamedi.”
The other seven men were arrested
when police raided three rented
homes in Chamkarmon district’s
Boeung Tumpon commune in Phnom Penh on January 8 and 9 in 2015.
Police arrested another Cambodian
woman found at one of the homes but
later released her. During the raids,
police found six large packages of
crystal methamphetamine weighing 802.44 grams and other drug-related
paraphernalia. Police said they had
been watching the group for a long
time and alleged that their ringleader,
Obieze Kenneth Uche, was still on the
run. During the trial, Ms. Vinyung said she
had been dating Mr. Chuwuonye, also
known as Tony, for three months
before their arrest. She told the court
that her boyfriend paid her $100 to
take a package to an unidentified man three separate times. “I admit that I
really did bring the package from
Tony and gave it to his clients at the
Sovanna supermarket, but I did not
know that the packages were drugs,”
she told the court. “If I had known that the packages were drugs, I would
not have agreed to bring them, even
though Tony offered to pay me
money.”
The eight Nigerian nationals
vehemently denied the allegations, saying they were Christians, not drug
dealers.
Mr. Chuwuonye acknowledged that he
had dated Ms. Vinyung, but said he
never asked her to take drugs
anywhere. “I was not a drug trafficker. I am a
Christian missionary. I did not do any
of the things I am accused of,” he said.
Mr. Victor, the leader of the Mountain
of Fire and Miracles Ministries church in
Phnom Penh, said he volunteered to come to Cambodia from Nigeria as a
Christian missionary in 2014 and has
run the church in Chamkarmon district
since then.
“Police arrested me while I was
praying at my own home. They handcuffed me and called me a drug
dealer,” he said. “But I don’t know
anything about this case or about any
drugs. I am the victim of accusations
and arrest by the police.”
He claimed police forced him to confess during an interrogation
session.
Mr. Chimedu, Mr. Victor’s brother and
an assistant at his church, said he had
nothing to do with drug dealing but
was arrested when police raided his home in Boeung Tumpon commune
on January 8. Police found no drugs
or paraphernalia at his home during
their raid, he said.
“I was a church assistant, and my job
was to prepare bibles and prayer ceremonies for foreigners every
weekend,” he said. “I have never
smoked or used drugs in my life. I’ve
never even seen drugs.”