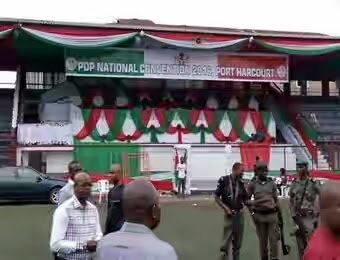 The much anticipated national convention of the Peoples Democratic Party (PDP), scheduled to hold today (Wednesday), may not take place at its venue, as the Sharks Football Club Stadium, Port Harcourt, Rivers State, when the convention is to hold has been sealed off by security agencies.

Feelers had it late Tuesday night that the convention may be a fruitless effort as some factional members within the party had disclosed to the Nigerian Tribune that the security agencies would take over the venue.

The main gate leading to the state Government House, along the Azikwe Road axis, was relative free as at 8:30 am as there was no heavy security presence, though an Armoured Personnel Carrier (APC) was seen packed closed to the gate.

The same cannot however, be said of Moscow Road/State Secretariat junction leading to the venue of the convention as there was heavy security presence at the axis.

The heavily armed combined team of MOPOL and regular police was seen conducting stop-and-search on motorists, even as they were prevented from accessing the road leading to the convention ground.

Meanwhile, as at the time of filing this report, there are indications that the PDP leadership was considering the possibility of shifting the national convention to another venue.

A source told Nigerian Tribune that the various caucuses of the party were in a meeting at the state Government House where a decision would taken on where the convention can possibly be held.

In a related development, three of the PDP national chairmanship contestants, Professor Tunde Adeniran, Chief Bode George and Dr Raymond Dokpesi, would be addressing a press conference on developments around the convention.

A source disclosed that the trio were alleging plans by Governor Nyesom Wike and his Ekiti State counterpart, Ayo Fayose, to skew the outcome of the convention in favour of another contestant from the South-West, Jimi Agbaje.

“The essence of the press conference is to let the world know that there is a grand scheme to rig the chairmanship election in the convention in favour of Agbaje”, the source said.

However, Governors Wike and Fayose had denied the allegation, on Tuesday, saying they would not be a party to any attempt to thwart the democratic process.