Published By Gabcos - August 11, 2016
There was pandemonium on
Wednesday in Umomi
community in the Ofu Local
Government Area of Kogi State
when some policemen attached
to the Ugwolawo division opened fire on a crowd of
protesting youths.
Two of the youths, identified as
Okaye Omodi and Zekeri
Mohammed, were shot dead by
the officers, who immediately fled to their station.
PUNCH Metro gathered that the
youths were protesting the
arrest and detention of some
residents, including a retired
police officer identified as Peter Adama.
Our correspondent gathered
that Adama and others were
arrested around 11pm on
Tuesday by some officers
attached to the Special Anti- Robbery Squad.
A resident, Jeremiah Idege, said
the operatives swooped on the
community after some Fulani
herdsmen reported that their
cows had been killed by some residents.
Idege claimed that the allegation
was false, saying that the
herdsmen had actually invaded
and destroyed the community’s
farmland. He said. “We have issues with the
Fulani herdsmen and that has
been on for as long as 15 years.
They have been destroying our
farmland with reckless abandon.
As I speak with you, our community is wrecked.
“The little we have left was
ravaged again by their cows
recently and we reported the
matter at the Ugwolawo Police
Division. We were given four policemen to follow us to assess
the level of damage done to our
crops.
“Later, the police said we should
come to a roundtable meeting
with the herdsmen so they could resolve the case; but we refused.
We just asked them to leave in
peace. If we collect any money
from them, they will say they
have bought the lands and they
will completely take over what we have left.”
It was learnt that a few days
after the mediation failed, the
herdsmen reported that some
cows had been killed by the
residents. Our correspondent was told that
some of the community leaders
followed the herdsmen round to
see the alleged dead cows, but
found none.
Another resident of the community, Sani Emmanuel, said
the herdsmen made the
allegation because they were
asked to leave the village.
Emmanuel said on Monday, the
Fulani leaders reported again at the police station that another
set of cows had been killed.
He said, “On Tuesday, around
11pm, a group of policemen
entered our village and started
breaking doors and ransacking our homes. They arrested a lot of
people, including Adama, who is
retired police officer.”
Emmnauel said the arrest did not
go down well with the
community youths, who trooped out on Wednesday to protest the
continued destruction of their
farmland without any help from
the security agents.
PUNCH Metro was told that the
youths blocked the roads and sang solidarity songs.
A witness, who did not want his
name in print, said the protest
was peaceful.
He said, “The protest, which
started around 10am, was peaceful and it was within our
village. Suddenly, armed
policemen from the Ugwolawo
division drove in and shot live
bullets into the crowd. We all fled
without knowing what had happened. The policemen had
left before we knew they had
killed two people.”
The corpses were said to have
been abandoned on the road
until the Ata of Igala, Mr. Michael Idakwo, reportedly arrived at
the scene and ordered that the
victims’ families should take
them away for burial.
A resident said, “We don’t know
who to cry to now that the police, who are supposed to
protect us, have turned against
us. We don’t know any human
rights organisation to turn to.
Please help us; we are helpless.”
The Police Public Relations Officer, Kogi State Command,
William Aya, confirmed the
incident, adding that the state
Commissioner of Police had
gone to visit the scene.
He said, “I don’t have all the details of what transpired now.
But the state Commissioner of
Police has gone to see what
actually transpired and assuage
the residents. I will get back
when I finally get the details.” He had, however, yet to call back
as of press time. 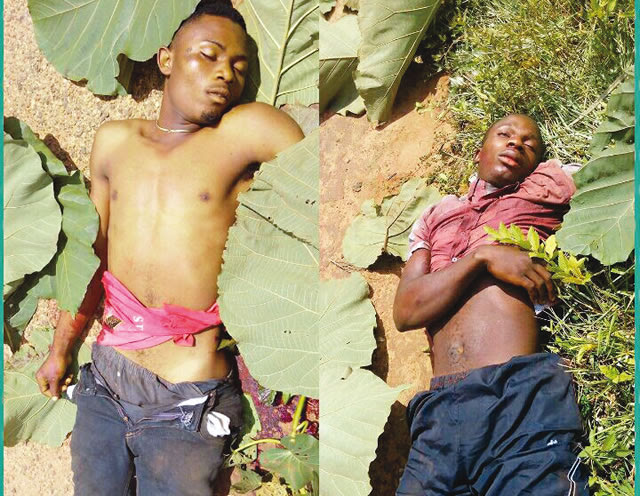