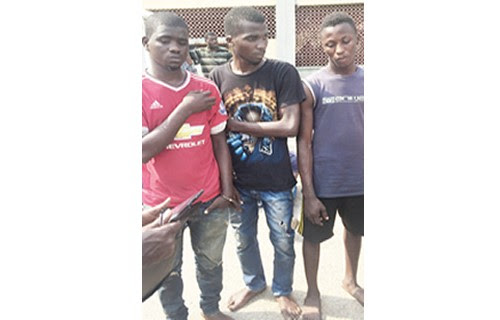 A 29 year old driver, Mr. Mayowa
Alabi, has told journalists in
Lagos how he stole his master’s
Automated Teller Machine (ATM )
card and withdrew N2.7million.
Alabi , who was paraded yesterday at the Lagos State
Police Command Headquarters,
Ikeja, said he only bought a
Black Berry phone from the
money while the remaining was
spent on women and clubbing. The suspect was arrested along
with his friends, Jeremiah Ibitoye
(26 ) and Opeoluwa John(18).
The state Police Commissioner,
Fatai Owoseni , said during the
parade that Alabi’s boss had been complaining about his
misplaced ATM card for some
days. But when Alabi saw it,
instead of returning it, he kept it
to himself. He said: “The driver
deactivated the ATM card and
sim card of his boss and
changed the pin of the card,
which barred the owner from
receiving alert and even calls. After a while, the real owner
discovered that calls and
messages were not coming
through his phone. “He then contacted the service
provider who told him that his
line had been deactivated from
receiving calls and messages.
Immediately, he reported to the
police who swung into action and discovered that it was his
driver and his (Alabi’s) friends
who hacked into his account
and phone line.”
But Alabi said it was greed which
pushed him into what he did. He said: “My boss is a nice person. I
just wanted to practise what I
learnt from the computer
training I went for.
I am earning N30,000 monthly
salary . All I bought from the stolen money was a Black Berry,
another phone, wristwatches
and laptop. I spent the
remaining money to party in
club and on women. “I regret
my action. I beg my parents to forgive me for bringing shame
and disgrace to them.
I promise to pay the money with
my salary if I get out the
problem. ” John , who is a
generator mechanic, said Alabi gave him the ATM card to buy
phones, laptops and some other
items at a popular mall.
He said: “I do not know
anything about the card cloning.
I agreed to go on the errand because he used to help me
whenever I needed his
assistance. I just left secondary
school last year.
“My parents are not aware that I
am in the custody of the police. I feel very bad finding myself in
this situation. I hope I will get
out of here soon because my
mates are in the university and I
desire to join them there.”
Ibitoye also denied knowing anything about the cloning of
the ATM card. He said: “Alabi
only called me to take John to
the ATM to withdraw money and
buy things for himself. ”
Owoseni, however, said the suspects would be arraigned
after completion of the
investigation.