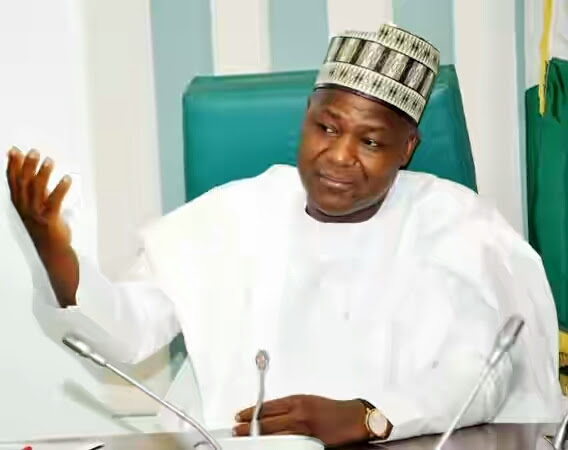 The All Progressives Congress
said it would not sanction House
of Representatives Speaker, Mr
Yakubu Dogara, or Rep.
Abdulmumuni Jibrin over
allegations of budget padding in the lower chamber.
Deputy National Chairman of the
party, Mr Lawal Shuaibu, said this
while briefing newsmen at the
National Secretariat of the party
on Thursday in Abuja. Quoting Article 7, sub-section 5
of APC Constitution, Shuaibu said
that the party had the power to
do certain things but that
whatever was going to be done
would not be revealed to the public.
He said, “what is padding? The
party does not sanction
anybody on that.
“What concerns us is where any
member contravenes the party’s Constitution by his conduct. That
is why I refer you to Article 7
sub-section 5 of our party
constitution.
“We are not a law enforcement
organisation; we don’t enforce laws. We only ensure that the
Constitution is complied with.
“Any member of the party is
answerable to the party and
answerable to its Constitution.
“The two members that are subjected to this are elected or
appointed members of the party,
including those that are holding
public office.”
He said that although the party
would not sweep the matter “under the carpet, it won’t be in
the public gallery’’.
Clearing the air on its main
source of finance, the deputy
chairman said that the party
solely relied on the N100 registration fee from about 12.7
million members in its data base.
“We have a credible source of
funding; every member of APC in
this country is expected to pay
N100. So far, on our data base we have 12.7 million registered
members.
“Others are still waiting for us to
just open our portal to do their
membership registration.
“Assuming those on our data base paid their membership levy,
just multiply N100 by 12.7
million members and you know
how much we get. So, we have
our way of sourcing for fund.’’
On the recent outburst of a Kano-based chieftain of the
party over President
Muhammadu Buhari’s
administration, Shuaibu said
“that man who claimed to be our
chairman in Kano is unknown to us as a party.
“Go to the directorate of
organisation of our party here
and demand to know who our
state chairman there is; if you
check our data base you will see the name of our state chairman
in Kano state.
“That person who made that
statement is not our member; we
actually don’t even know him, to
be very honest.” He announced that a committee
had been set up to review the
party’s constitution before a
mini-convention will hold.