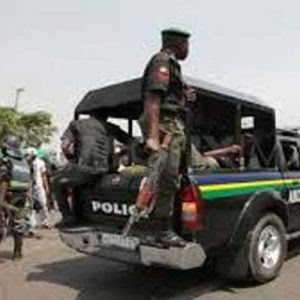 The heavy presence of security agents averted what could have been mayhem in Alaba International Market, Ojo, Lagos, yesterday.

Traders in that section of the market, locked their shops to protest the overbearing influence of Chief Azubuike Ekwerekwu, aka Obosi, who they claimed had enslaved them over the years, by forcing them to pay through their noses in matters of security, shops and PSP, among others. They also accused him of ‘manipulating the elected executives’ to exploit them.

The protesters marched to Ojo Police Station carrying placards with different inscriptions like “Obosi must go,” “Obosi has exploited us enough,” “Obosi is our problem,” “Obosi rules market with thugs and in-laws” and “Obosi has enslaved us.”

One of the protesters, Inno, told Daily Sun that, “Obosi is the problem we have in Alaba market.”
According to him, Obosi is too powerful and does not allow the elected members of the market to work. “He is the one who determines whatever each trader will pay. We want the man to leave the traders alone.” Another demonstrator, simply identified as Ken, said they can no more tolerate the overbearing influence of Obosi.
“Take for instance, the Vice President of the Amalgamated Traders Association is his boy. The financial secretary is his boy. The treasurer is his in-law. The public relations officer (PRO) is his brother, the task force chairman is his nephew, the store keeper is from the same town with him and the ward chairman is his boy.”
Another traders, who pleaded anonymity for security reasons, said what brought about the protest was the arrest of the market security chairman identified as Okey by policemen from Ojo Police Station.

This development frayed nerves, and was about to degenerate into chaos, but the traders took their protest to the Ojo Police Division.

President of the Amalgamated Traders Association of Alaba International Market, Emeka Mozoba, bailed Okey and appealed to the traders to go back to the market.
Addressing the traders, Azubuike assured that their freedom had started. He and other leaders were invited to Area E Police Command, Festac Town.
As at about 2.00pm, the traders were yet to open their shops.