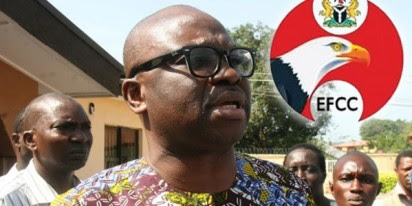 *EFCC rejects bail, files stay of
execution
*EFCC acting wickedly, on vendetta
mission — EKITI GOVT
By Soni Daniel, Northern Region Editor
& Ikechukwu Nnochiri ABUJA—Justice Olukayode
Adeniyi of an Abuja High Court
at Maitama, yesterday, admitted
an aide to Governor Ayodele
Fayose, Mr. Abiodun Agbele, bail
to the tune of N50 million. Agbele, who has been in
custody of the Economic and
Financial Crimes Commission,
EFCC, since June 27, had through
his lawyer, Chief Mike Ozekhome,
SAN, approached the high court for the enforcement of his
fundamental human rights.
While querying the legality of his
continued detention without
trial, Agbele, told the court that
the anti-graft agency arrested and kept him in its custody on
the premise that it is
investigating over N1.3 billion
that was allegedly traced to
governor Fayose’s personal
bank account. Aside praying the court to order
the immediate release of his
client, Ozekhome, SAN, also
requested that N500 million be
awarded to the applicant as
compensatory damages for his unlawful arrest and detention.
Specifically, Agbele prayed the
court to enforce his fundamental
rights to liberty, human dignity
and the right to acquire and own
properties in line with provisions of the 1999 Constitution, as
amended.
Delivering judgment on the
matter, Justice Adeniyi declared
the action of the EFCC in
detaining Agbele beyond the period stipulated by the law as
wrongful, unlawful and
unconstitutional.
He said the continued detention
of the applicant without trial or a
valid court order was in breach of his fundamental human
rights.
Consequently, Justice Adeniyi
imposed a fine of N5million on
the EFCC, saying the money
should be given to the applicant as compensation for his
unlawful arrest and detention.
The judge said the anti-graft
agency could not controvert the
allegation that it has kept the
applicant in its custody beyond the period stipulated in section
35 of the 1999 constitution.
According to the court, the fine it
imposed on the agency was to
make it learn how to operate
within the ambit of the law. Justice Adeniyi further faulted
the commission for rushing to an
Abuja Chief Magistrate Court to
secure a remand warrant, while
Agbele’s fundamental right
enforcement application was already pending before his
court.
He maintained that the
Magistrate Court would not have
granted the remand order if it
was aware of the potency of the suit before the high court.
He went ahead and voided the
remand warrant the Magistrate
Court issued to the EFCC.
He therefore released the
applicant on bail in the sum of N50 million and a surety in like
sum.
The surety, according to the
court, must be a top ranking civil
servant with the federal
government or any of its agencies and must show
evidence of residence in Abuja.
More over, the court directed
Agbele to surrender his
international passport with the
EFCC. It however ordered the
commission to within 21 days,
either charge the defendant to
court, or release all the property
it seized from him.
EFCC rejects bail, files for stay of execution
Meantime, the Economic and
Financial Crime Commission,
yesterday, expressed
indignation over the ruling of a
Federal High Court, which granted bail to an ally of
Governor Ayo Fayose of Ekiti
State, Abiodun Agbele.
Responding to the action of the
judge, the EFCC described his
ruling as ‘shocking’ and indicated its readiness to appeal
against it and file for a stay of
execution.
Spokesman for the EFCC said it
was ‘curious for Justice Adeniyi
to grant bail to a suspect who is being investigated for a range of
financial crimes bordering on
fraud and money laundering.
EFCC on vendetta mission — Ekiti
Govt
Reacting through the Special Assistant to the Governor on
Public Communications and New
Media, Lere Olayinka, the Ekiti
State Government has described
EFCC's decision to appeal the
Abuja Federal High Court judgment, granting Governor
Ayodele Fayose’s ally, Mr
Abiodun Agbele bail and
awarding N5 million damages in
his favour as clear
demonstration of the anti- corruption agency’s wickedness
and show of vendetta against
the governor.
A statement made available to
Vanguard by the Spokesman for
the EFCC, Mr. Wilson Uwujaren, said the judge’s conclusions
were shocking given the
background of the information
presented to the court, which
included the fact that the suspect
was being held with valid remand warrants issued by
competent courts.