Taxi Driver Absconded With A Passenger’s N1.8m In Abuja & This Happened (Photo) 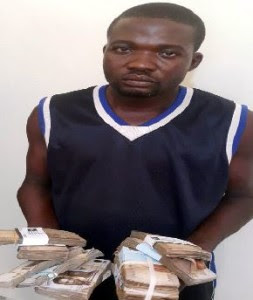 A 38 year-old taxi driver,
Muritala Olugunju, has been
arrested by operatives of the
Inspector General of Police
Special Intelligence Response
Team, for stealing the sum of N1.8million from a passenger.
The suspect, who is a native of
Ogun State, was said to have
picked his passenger, identified
simply as Mohammed, at Wuse
Zone 6 area of Abuja for shopping, before taking him to a
hotel where he wanted to stay.
The victim, who was visiting
Abuja, was said to have entered
into the hotel to book a room,
leaving his bags containing his cash and other belongings in the
taxi, but the taxi driver made
away with the passengers
belongings.
The victim, who became helpless
following the incident, alerted the police at IRT, who trailed the
suspects and arrested him few
weeks later. The suspect during an
interview told Vanguard that
the devil pushed him into
stealing. He explained that he
suspected that the victim had
money in his bag because he didn’t go to the bank or use an
ATM throughout their trip. “ I
gave N200,000 to my girl
friend and I also gave my
sister N80,000. Then I bought a
car for myself which I intended to use for my
business, but before I knew
what was happening, I was
arrested. I regret doing this
and I hope my passenger will
forgive me.” he pleaded.