See What Suspected Militants Did In Ogun 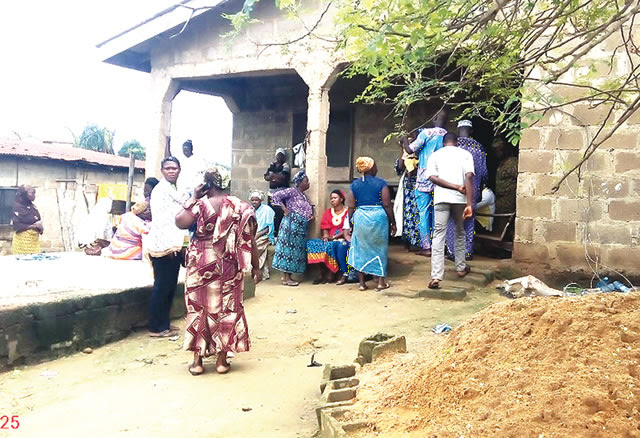 Residents of Halleluyah Quaters
in the Ibafo area of Ogun State
have been thrown into
mourning after some gunmen
attacked the community and killed an 85-year-old Islamic
cleric, Kareem Olaiya.
During the two hours raid of
houses in the community on
Monday, a landlord, Scott Odum,
was also abducted after his property was looted.
One of his children, who begged
the gunmen not to take him
away, was hit with the butt of a
gun.
Our correspondent, who visited the community on Monday, saw
Kareem’s corpse where it was
laid in a room, as sympathisers
thronged the house.
Family members, who were just
learning about the incident, broke down in tears, as cries of
sorrow filled the air.
The footprints of the suspected
militants were still visible in some
of the places where they
operated when PUNCH Metro visited.
Although the attack reportedly
occurred around 2am, as of
12pm when our correspondent
left, no security agent had visited
the community. PUNCH Metro observed some
policemen sitting near an
armoured tank marked, F-SARS,
in front of the Ibafo Police
Station, guzzling beer from
bottles in three crates. The policemen dropped the
empty bottles in a spot close to
the armoured tank.
A resident, Bode, who said four
of the gunmen attacked his
apartment, explained that they ordered him to lie down as they
ransacked his room.
He said, “I was having a vigil
with my wife when I observed
some movements around the
house. I initially thought they were local vigilantes, but
immediately I sensed they were
militants, I quickly switched off
my lights.
“However, they found their way
inside the house and threatened to kill me if I made any phone
call.
“The second man pointed a gun
at me and asked me to lie down;
I complied. While they were
ransacking my property, one of them saw a logo and said I was
a policeman. I told them it had
nothing to do with the police. I
quickly showed them my ID card
to debunk the claim.”
PUNCH Metro learnt that the gunmen, who wore masks,
spoke pidgin English.
One of the children of the late
Islamic cleric, Abdulganiyu, said
his father died from shock after
the gunmen fired into the air. He explained that the
kidnappers had targeted Bode’s
landlord, whose house was
opposite theirs, adding that the
landlord had left the community
the previous day. He said, “We were all asleep
when we heard sporadic
gunshots. Baba (Kareem) woke
up from sleep and started
panicking. He sat on a chair and
soon slumped and died. He was killed by the shock of the
sporadic gunshots.”
A relative of the landlord that
was kidnapped in the
community said the attack
caught them unawares. She said despite carting away
money and phones, the gunmen
still abducted Odum, an IT
expert.
“They scaled the fence into the
house and opened the door after breaking the glass window.
They put guns to our heads
during the whole operation, so I
could not look at them. One of
the children, who begged them,
was hit with the butt of their gun,” she added.
PUNCH Metro was told that
Odum’s wife had been
hospitalised for about a week
after suffering shock from a
previous attack on the neighbourhood.
A resident, who spoke on
condition of anonymity, said
some landlords mobilised to
stop the gunmen from escaping
with Odum after the police failed to intervene.
“We expected them to take a
particular route out of the
community, and we had laid in
ambush for them. Unfortunately,
they took a different route,” she added.
A community leader wondered
why the police refused to come
to their aid, saying each time
there was an attack, the police
always left the community to its fate.
“The militants have been coming
every day for the past three
weeks. When they come, they
burgle houses, abduct landlords
and rape women. They kill our goats and chickens as well. We
have been under siege without
any help from the police.
“During this latest attack, we
called the Ibafo Divisional Police
Officer around 3am and he said he had alerted his men. Nobody
has shown up till now
(10.30am).
“The acting Inspector-General of
Police said he had deployed a
mobile police force to Ibafo, but these men only watch over the
police station and drink alcohol.
They don’t fight the militants.”
The Police Public Relations
Officer, SP Muyiwa Adejobi, said,
“The police are not aware of the attack. Let the complainant see
the DPO.”