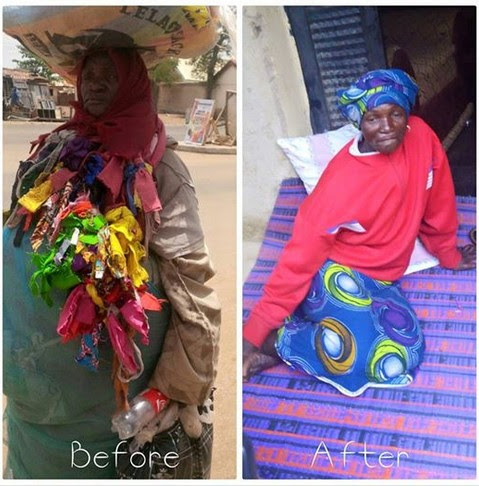 Bauchi state is agog with joy after an
old mentally unstable woman received
her miracle unexpectedly and has
regained sanity. According to reports,
the woman had wandered across
parts of the state for about 7 years following her mental condition.
Solution came her way recently after
Pastor W.F Kumuyi of Deeper Life Bible
Church healed her in a crusade.
Read below what was written by a
witness -Dedan Dedanson Denmark This woman will never forget Sunday
24/7/2016 in her entire life because it
is a day she received a total healing
from the lion of the tribes of Judea, the
healer through his servant pst. W. F
Kumuyi on his one day visit to Bauchi. The woman was said to be from
Bogoro local govt area an use to work
as a cook in a secondary school
(PERFECT MEMORIAL SECONDARY
SCHOOL MUARI) in muari village,
although she never know what happened to her but her close
relations wen contacted said she has
been in dis condition for about 7yrs or
so, she stayed in so many places
before settling @ Rafin-Zurfi in the
middle of the road(street light) close to Benco Junction.
It was gathered that one mechanic Mr.
Zamani Christopher, a young lady
(Luzar) who use to give her food an
two other guys Mr. Matthew an Ayuba
a son to Mr. Zamani persuaded her to enter a car to go to the crusade
ground behind ATB STADIUM were the
miracle took place. Never doubt the
power of prayer because i saw dis in
practical i personally spoke wit dis
woman an i touched her God is great keep believing an trusting Jesus for all
ur problems. 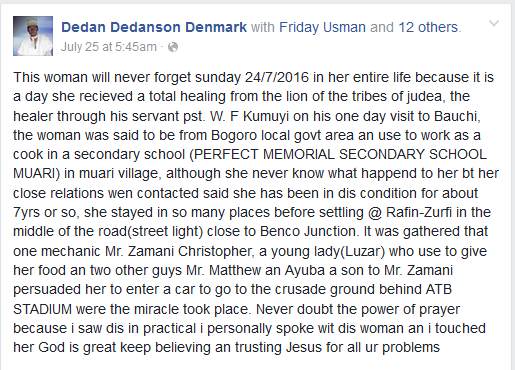