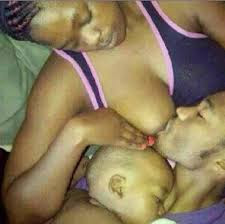 Prof Wale Oke, the Chief Medical
Director (CMD) of Lagos State University
Teaching Hospital (LASUTH has called
on men to stop competing with their
babies to suck the wives’ breast.
Oke urged his fellow men to allow their babies to enjoy their natural
meal.
He spoke at the World Breastfeeding
Week (WBW). The programme was
organised by LASUTH Community
Health Department in conjunction with the hospital’s Pediatrics.
According to him, the benefits of
exclusive breastfeeding were many.
He said: “When a mother breastfeeds
her baby, it creates bond between
them. It is also a natural family mechanism. Breast-feeding mothers
do not have bone diseases, breast and
ovarian cancers”.
Oke said the state had created an
enabling environment for mothers
with its policies to work and still feed their babies.
“Working and breastfeeding can go
together if mothers try because it is
necessary to have healthy babies,” he
said.
On her part, First Lady of Lagos State, Wife of Lagos State Governor, Mrs
Bolanle Ambode urged mothers to
breastfeed their babies exclusively for
six months so that they can be
healthy.
This, according to her, would prevent babies from coming down with
childhood diseases, such as cough,
diarrhea and catarrh, among others.
Mrs Ambde, represented by the
Permanent Secretary of the state’s Civil
Service Pension Office, Mrs Ademola Olabowale, said medical science had
made it known that breast supplied
basic nutrients to newborns, adding
that the breast milk remained the most
important protein for babies’ growth.
“The World Health Organisation (WHO) recommends exclusive breastfeeding
for six months, and mixed
breastfeeding up to two years,” she
said.
Breast milk, she said, usually helps to
build the immunity for the newborns, saying it would protect them from
childhood killer diseases..