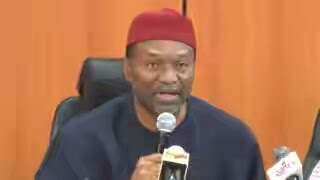 The Federal Government on
Thursday dismissed insinuation
in some quarters that it would
not be able to pay its workers’
monthly salaries from October
due to current economic and financial challenges in the
country.
The Minister of Budget and
National Planning, Udoma Udo
Udoma, stated this in Abuja
while addressing State House correspondents after the
monthly National Economic
Council meeting.
The meeting was presided over
by Vice-President Yemi Osinbajo
(SAN). Udoma stated that though the
country was facing economic
challenges, the Federal
Government would continue to
pay its workers’ salaries as when
due. He said: “We have paid all
salaries.
“Federal Government has always
been paying its salaries and
there is no risk whatsoever that
there is going to be a situation where the Federal Government
will not pay salaries.
“Let me also say that we are
about to have FAAC this month.
“There is actually an increase in
the amount that is going to be available in FAAC.
“I will let the Minister of Finance
to talk about the exact amount.
“There is an increase because of
FIRS.
“Our tax collection is going up. “When I appeared before the
Senate last week, I did inform
Nigerians that indeed we are
beginning to move up.
“Our revenue situation is actually
improving this month already. “Our tax collection is already
improving.
“There is no doubt that we are
actually going through a difficult
time but things are improving.”
On the state of the nation’s economy, the Minister also
dismissed the assertion that “the
economy is in recession”.
Udoma said: “Recession is
basically when you have two
quarters of negative growth. “We had a first quarter of
negative growth and we are still
waiting to get all the figures for
the second quarter, which has
just ended in June.
“The National Bureau of Statistics will be giving us all the figures
but if as we suspect the second
quarter is also negative, then of
course technically you could say
that we are in recession if those
figures turned out to be so. “But even if we are not, the
situation in the economy right
now is one that of course we are
addressing.”
The minister, who described
2016 as the most challenging year to Nigeria, promised that
government would not fail in
fulfilling its promises to
Nigerians.
Udoma said: “But this year has
been a difficult year. “We did not expect the
disruptions in the Niger Delta
and which led to the reduction in
the amount of production of
crude oil and also affected
power supply because a lot of our power is supplied by gas.
“So, it affected the power supply.
“So that is basically it.
“We are expecting the economy
to begin to grow again from the
third quarter unto the fourth quarter.
“We are focusing on non-oil, we
are focusing on agriculture, solid
mineral and manufacturing.
“So, basically, we see what we
are going through as an opportunity in some ways to
finally move away from total
dependence on the single
commodity crude oil.
“We believe that Nigerians have
the capacity to turn this thing around.
“It is the private sector that is
going to do it.
“Our role as a government is to
provide the enabling
environment for that to happen. “We are confident that that will
happen