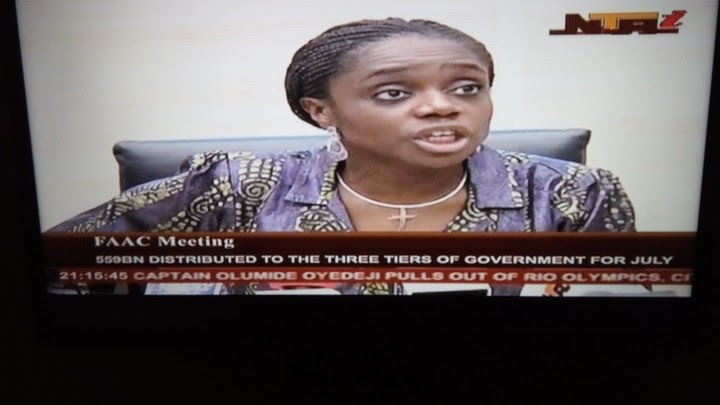 The Federal Account Allocation
Committee (FAAC), says on Thursday it
distributed the sum of N559.032
billion to the three tiers of
government. This makes it highest allocation
since the APC led administration of
President Muhammadu Buhari took
over power 12 months ago.
The Excess Crude Account (ECA) has
also increased from $2.61b to $ 3.094 billion. Minister of Finance and Chairman of
FAAC, Mrs. Kemi Adeosun, who
chaired the meeting said that the
gross statutory revenue of
N538.788 billion received for the
month was higher than the N237.466 billion received in the
previous month by N301.322
billion.
She attributed the improvement in
the revenue to the non oil sector
especially the Federal Inland revenue (FIRS) which she said has
increased its collection by N165
billion as well as the Nigerian
Customs Service. Giving the breakdown of the
distributed figures, the Federal
Government received a total of
N209.46 billion inclusive of its 52.68
percent and 15 percent Value Added
Tax (VAT). The State government received a total
sum of N133.671 billion VAT inclusive
while the Local Government Councils
got the sum of N100.759 billion VAT
inclusive. According to the Minister, Crude oil
export volume increased by 1.9
million barrels in March, 2016 despite
the subsisting Force majeure declared
at Forcados Terminal, Shut-in and Shut
down of pipelines at other terminals due to leakages, vandalism and turn
around maintenance. The average price of crude oil
increased from $32.26 in February to $
38.64 in March, 2016 resulting in $
92.99 million increase in Federal
Export Revenue.
There was an outstanding increase in Companies income Tax (CIT) and
Petroleum Profit Tax (PPT) with
complementary increase in Import
Duty and royalties.
The sum of N6.330 billion was
refunded by NNPC to Federal Government of Nigeria, while N9.923
billion Solid Mineral Revenue
generated from 2007 to 2014 was
also distributed.
Also there was exchange gain of
N79.272 billion which was proposed for distribution.