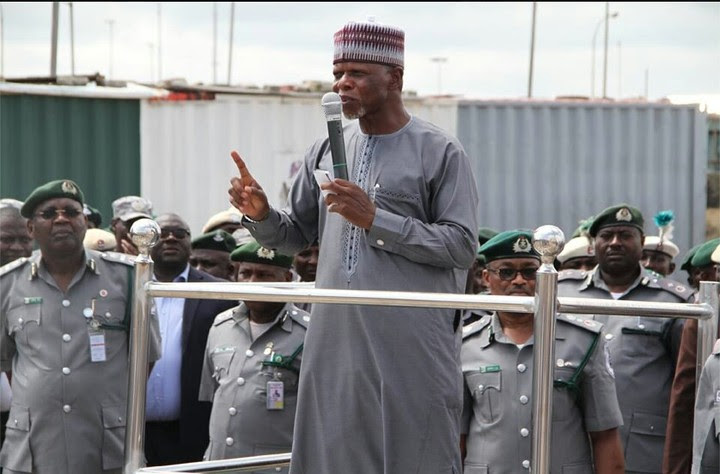 EXCLUSIVE: Nigeria Custom
boss, Hamid Ali, violates
Buhari’s directive, flies first
class from London The Comptroller General of
Customs, Hamid Ali, a well
known ally of President
Muhammadu Buhari, was
spotted on Tuesday flying first
class on British Airways flight from London to Abuja, in clear
violation of President
Muhammadu Buhari’s directive
banning public officials from
flying first class.
The BA flight BA83 which took off from Gate 43 of Heathrow
Terminal 5, London, on Tuesday,
nearly an hour behind its
scheduled 10.43pm departure
time, arrived the Nnamdi Azikiwe
International Airport, Abuja, on Wednesday morning at about
5a.m, with Mr. Ali on board.
The reasons for Mr. Ali’s travel to
London remained unknown as
at the time of publishing this
report, but customs insiders said the trip was official.
Several passengers on the flight
told PREMIUM TIMES they saw Mr.
Ali seated in the First Class
compartment of the aircraft
during the flight. “It was a major talking point
among some passengers
whether the policy (barring
public officials from flying first
class) is being implemented with
exceptions or whether it is meant for the shelves,” one
passenger on the flight told this
newspaper.
There were notable Nigerians on
board and a number of them
confirmed to this newspaper that the customs comptroller-
general was in the first class
cabin of the aircraft during the
flight.
A first class ticket to and from
London costs $11,423.23 (about N3.4million).
Besides being a close friend of
Mr. Buhari, Mr. Ali, a retired army
colonel, is a man seen by many
Nigerian as frugal and
incorruptible. When PREMIUM TIMES contacted
the customs spokesperson, Wale
Adeniyi, on Thursday, he
confirmed Mr. Ali was on the BA
flight, but that he travelled on a
business class ticket. Mr. Adeniyi was not on the flight,
and he responded to our
reporter’s enquiry without
checking with Mr. Ali.
But our sources, some of whom
travelled business class, said Mr. Adeniyi’s claim was inaccurate.
“That is not true,” one passenger
said. “I was on business class,
and I was awake most of the
flight. So if you line up those on
business class during that flight, I can identify them.”
President Buhari had in April
caused the Minister of Finance,
Kemi Adeosun, to issue a circular
to all government agencies
barring top officials from travelling first class.
The measure was to cut the high
cost of travelling by public
officials, Mrs. Adeosun said.
The minister said even travels
with Business Class tickets remained strictly restricted to
only ministers, permanent
secretaries, chairmen of Federal
Government committees as well
as chairmen and chief
executives of parastatals and agencies.
That means other categories of
government officials, including
directors and special assistants,
are to travel on economy tickets.
Mrs. Adeosun said the measure was part of the
recommendations by the
Efficiency Unit of her ministry to
cut travel expenditure by about
20 per cent.
The recommendations were as a result of the review of the
provisions of some extant
government circulars on
overhead expenses on official
travels, the minister said.
The review was carried out in collaboration with the Office of
the Secretary to the Government
of the Federation (OSGF) and the
Office of the Head of the Civil
Service of the Federation (OHCSF)
. Administration insiders said the
appointment letter issued to Mr.
Ali by the office of the Secretary
to the Government of the
Federation indicated clearly that
he could only fly on business class tickets.
It however remained unclear
Friday how the Ministry of
Finance is monitoring and
enforcing compliance with the
circular on travel expenses by officials.