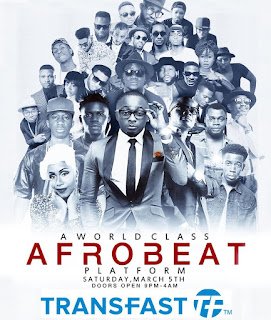 Afrobeat music is constantly growing on a global scale. In Africa and abroad, people are gradually getting more and more interested in the genre.
Now Afrobeat music is reaching far beyond the borders of the African continent with the Vibesland Music Festival - an annual event which will catapult Afrobeat music genre from American niche genre to the status of definitive rising music genre in the mainstream music and entertainment industry of the United States.
In the United States and the North American region, Rock music has the Rock The Bell Concert, hiphop has the HOT 97 Summer Jam, and now, Afrobeat music will have the Vibesland Music Festival as the premier Afrobeat concert - the first of its kind - in New York and the North American region.
The show is expected to attract thousands of fans annually with guest performances from various afrobeat artists.
The show will position itself as the premier event for millions of Africans in the United States of America. It will feature allstar african artists from home and abroad.
It is also an opportunity for artist, entertainers, entrepreneurs, African fashion moguls, and corporate organisations from Africa and within the US to expand their reach to millions of Africans in the diaspora via event sponsorship and onsite advertisement.
One of such organizations, Transfast, a leading worldwide money transfer service solution offering cheap, secure services, is sponsoring the first edition of the Vibesland Music Festival.
“We at Transfast believe in offering quality products and a great User Experience but most importantly, we believe in the customers’ opinion,” the company said.
Speaking on why Transfast is sponsoring the event, Jay Vix, Global marketing Director for Transfast, who will also be speaking at the event, says, "I've always believed that African sound is the source of music from around the world. So I'm very excited to be a part of this AFROBEAT project."
The Vibesland Music Festival is a well strategized, well-positioned, and properly executed event to make all Africans in the diaspora proud of their heritage and the music of their motherland.
The Vibesland Music Festival will hold on Saturday, March 5, 2016 at the Amazura Concert Hall, Queens, New York from 9pm - 4am.
The event is set to feature some Nigerian stars which includes; Sean Tizzle, Dammy KraneB, Kas, and MAY7VEN.
Event details
SATURDAY, MARCH 5TH, 2016. 9PM - 4AM
AMAZURA CONCERT HALL, QUEENS, NEW YORK
ONLINE TICKETS : VMF2016.EVENTBRITE.COM 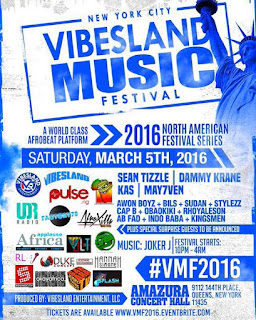