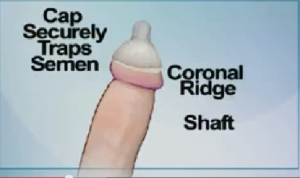 An American has invented a new condom which he says is stronger, safer and enables better sensitivity. And the new condom is called the Galactic Cap Condom (Pe_nis Helmet)


This new condom sits only on the very tip of the joystick, leaving the shaft exposed boosting sensitivity and enabling easier application. It was developed by LA-based Charles Powell after one of his friends contracted HIV.

The condom comprises two parts – a U-shape polyurethane adhesive film that wraps around the joystick
– like a plaster around a finger – and a cap that sticks to it to firmly trap Fluid.
Mr Powell claims the polyurethane part is like a second skin – and can be put on hours or days in advance as it can be worn while urinating and washing. But when a man wants to have sex, he peels off the paper backing on the cap and sticks it to the polyurethane to securely bond the two and trap Fluid.‎