Osun Lecturer Faints In Bank After Finding N150 As February Salary In Account.

Published By Gabcos - August 08, 2015
A lecturer in a tertiary institution in Osun State (name withheld), on Thursday, collapsed inside a bank located within the institution’s premises following a discrepancy in his salary.

Witnesses said the lecturer fainted after discovering that his account had only been credited with N150 by the state government as 50 percent of his February salary instead of N150,000.

The lecturer, who is a post-graduate student at the Federal University of Technology, Akure (FUTA), according to a witness, lamented, after being resuscitated by the bank’s officials, that the money paid by the government into his account could not even transport him to Akure, where he was billed to write an examination.

The man, it was gathered, also disclosed that he had some outstanding fees to pay at the university which he had proposed to pay with the expected salary.

As of the time of this report, he was said to be in a private hospital in Osogbo where his blood pressure, which had increased as a result of the shocking discovery in his account, was being managed.

Staff members of four tertiary institutions in the state - Osun State College of Technology, Esa-Oke; Osun State Polytechnic, Iree and colleges of education in Ilesa and Ila-Oragun - have expressed concern over alleged discrepancies in the payment of their salaries since November 2014.

A lecturer in the Department of Accounting in one of the schools (name withheld) lamented that his gross salary and net pay were N210,000 and N140,000, respectively, but he only received the sum of N260 as his February salary.

A management staff of the institution, whose salary is about N400,000, was also said to have received N12,000 for the same month.

Many teaching and non-teaching staff members of the institutions have criticised the state government for what they called the abnormalities being witnessed in the payment of their outstanding salaries.

It was also alleged that monies deducted by the state government from workers’ salaries for the purpose of schemes like the cooperative society had not been remitted since August 2014.
When Saturday Tribune visited the institutions on Friday, the gates were locked by workers who were protesting the development.

A worker at one of the institutions told Saturday Tribune that he collected the sum of N30,000 in December, N58,000 in January, while he received N125 as his take-home for the month of February.
He said fuelling his car from Ilesa to Esa-Oke had become a problem, just as he had been unable to collect his children’s report sheets from a private school in Ilesa because he could not pay their tuition.

The Public Relations Officer of the Academic Staff Union of state-owned institutions, and ASUP chairman of the state Polytechnic, Iree, Mr Dotun Omisore, in an interview with Saturday Tribune confirmed the ordeal of the lecturer who fainted and also condemned the “abnormalities and irregularities” in the payment of salaries of workers, saying that “we will not call off our strike until all our salaries and deductions” are paid by the state government.

Omisore warned that the deduction of workers’ contributions to the contributory pension scheme by the state government since about 36 months ago allegedly without remittance to the pension managers must also stop.

“If they cannot account for the one they have deducted, they should stop further deductions. Our pension is our hope and future. After 30 or 35 years in service, what are we expected to collect if the government is not remitting it?”

Omisore, however, disclosed that the Chief of Staff to the Governor, Mr Gboyega Oyetola, had invited labour leaders in the institutions to a meeting this weekend to discuss the “abnormality” in the payment of salaries. 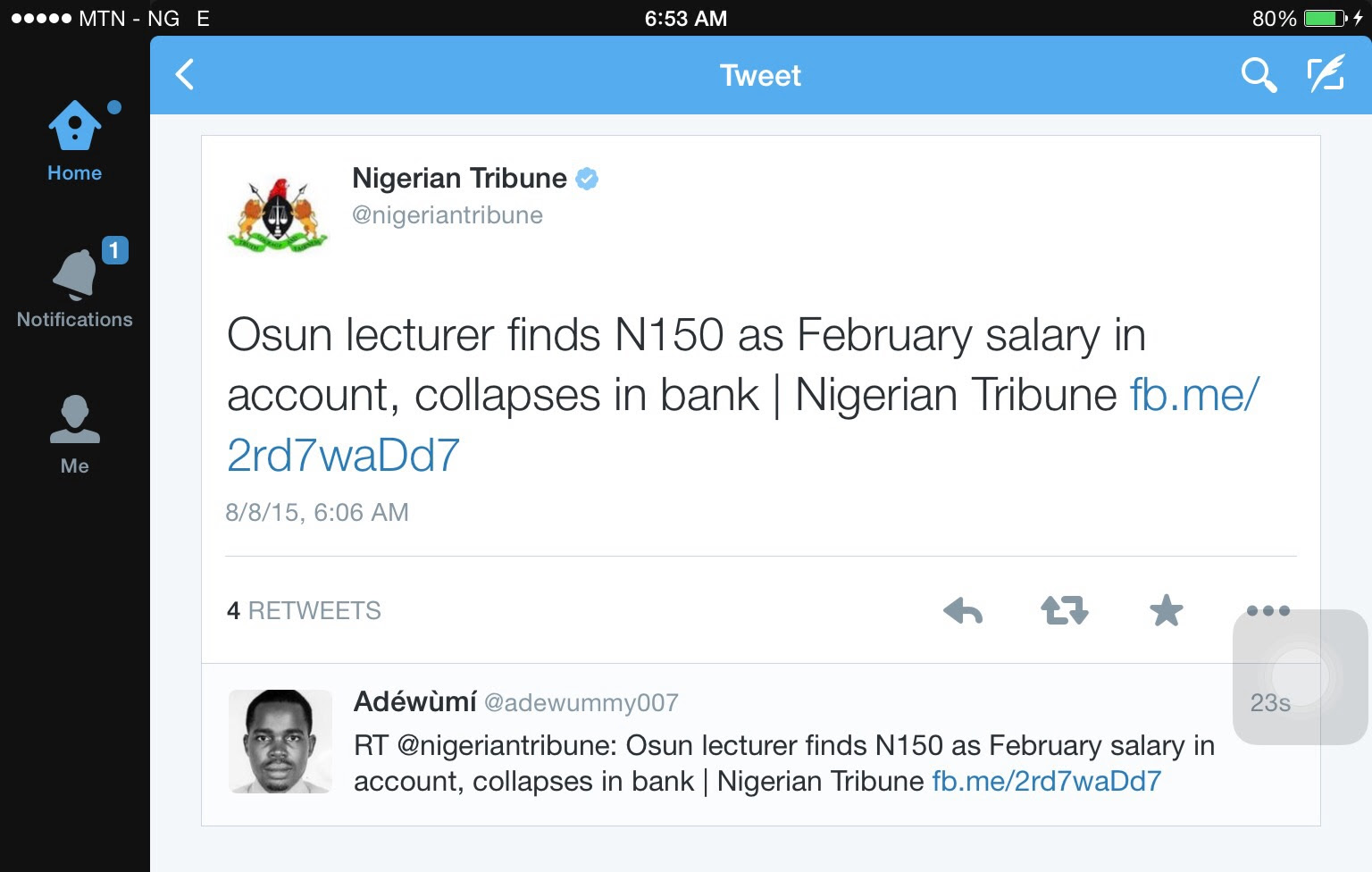