OMG! Guy Slits Girlfriends Throat, Had S33x With Her As She BLED TO Death 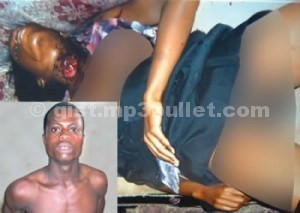 Most of you have read the story, but just to remind you. On Tuesday April 30th, a 25 year old bricklayer named Akinloye Anuoluwapo slit his ex-girlfriend’s throat, a 21year old girl named Rafiyat Akinyemi, then had s*x with her as she bled to death in her father’s house at Ogijo in Ogun state.
The girl had dumped him and that was too much for him to take. He went to her house armed with a knife and attacked her. Akinloye (pictured above) explains what led to the killing...On April 29, I missed her call, and in annoyance, she sent me series of annoying text messages, warning me not to call her or come to her house. I had once sent a message to her, appealing that she should not abandon me because I was disowned by my parents because of her, saying that I would commit suicide if she did. In reference to that message, she said I could die for all she cared, saying that my exit would create more enjoyment for the living, including herself.
His story continues after the cut. But please be advised, there’s a graphic photo after the cut.
“I was so disturbed that I could not concentrate at work the following day, April 30. I went back home to take a knife I kept in my box. I went to her house around 8.30a.m. and met her alone. I was thinking I could use the knife to frighten her because we used to quarrel like that and settle it. To my surprise, she stood up and started shouting at me, saying she had warned me not to come to her house again.   “She held me and we started struggling in her parents sitting room. I made up my mind to have s*x with her and I was able to penetrate her as we were struggling with each other. It was in the process that the knife pierced her throat. Immediately I saw blood, I was afraid, so I drew the knife out and ran away.
“I called my company’s lawyer and told him. I also called my friend, Gbenga, to go to Rofiat’s house and assess the situation. He told me he saw her where she was lay, dead.
“I lost my peace and could not do anything at work until the police came to arrest me. I know that I have sinned against God and erred against the law of the land. I know that the law cannot spare me, I know that I will die, but I just pray that God will forgive me. I know I will be hanged but I just pray that God will receive my spirit.”