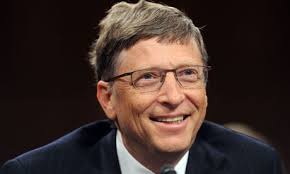 Apparently referring to his spiritual endowment, the general overseer of the Redeemed Christian Church of God (RCCG), Pastor Enoch Adejare Adeboye, has said that he is richer than one of the world’s richest
men, Bill Gates.

Teaching the worshippers in the mission during the church’s 63rd Annual Convention on Saturday shortly before the Holy Communion Service on the topic; “Overflowing Cup,” Pastor Adeboye said that
if Bill Gates needs shoes, he would have to go to the market to buy them, but that if he should announce that he needs shoes at the Redemption Camp, where the convention took place, the auditorium might not contain the shoes people would donate to him.

“I have houses in at least 188 countries of the world, where we have our churches, so I am richer than Bill Gates. Each time I visit these countries, my children would be struggling and saying ‘daddy, come and stay with me.’

“ If I announce here that tomorrow morning, I need a car to travel to the new auditorium, how many cars do you think would be made available to me by you my children? Those of you that do not have a car of your own, very soon, God will give you your own cars. So, I am appealing to you to become an incurable soul winner before you leave this convention ground and your cup will overflow,” he said.

The man of God had earlier used the occasion to warn that any of the mission’s provinces with the dirtiest hostels at the camp would not be allowed to attend next year’s convention, and advised that people should tidy up their dormitories.

Meanwhile, a total of 104 children, comprising 49 boys and 55 girls, were delivered at the camp ground of the mission as at Saturday, 8th August.

The Friday, August 7 Convention/Holy Ghost Service, which attracted millions of people from all over the country, and which caused heavy traffic gridlock along Lagos-Ibadan Expressway, witnessed salvation, testimonies, prayers, songs and healing, where the lame walked and the sick got healed.

There were also many powerful testimonies during the Friday Holy Ghost service, with a woman testifying of how she was healed of cancer, while another woman, who was barren for 20 years, said God eventually gave her a set of twins through the ministry of Pastor Adeboye.

Another lady, who was possessed by a marine spirit, also gave a testimony of how God delivered her and she vomited two keys, which she showed to the congregation as proof.

Also testifying, Benue State governor, Samuel Ortom, said that he dropped out of school in 1979 and became a motor park tout, but that he is now a holder of a doctorate degree and a worker in RCCG.

He said, “Pastor Enoch Adeboye prayed for me concerning my ambition to become governor and it came to pass after many years of my attempt to hold a public office”.

In his sermon, Pastor Adeboye assured the congregation that God is sufficient in all ways, adding that God can reverse all the irreversible and solve all their problems if they obey Him.

Welcoming the vice president, Professor Osinbajo to the convention on Saturday, Pastor Adeboye stated that he is not just a pastor in the mission, but that the VP is also one of the mission’s ushers, who minister
during special occasions.

“I don’t know why he was not allowed to officiate during the convention. I hope he would do so during the congress in December. I want you to send our regards to President Muhammadu Buhari and we want him to join us next time,” he added.

Daddy Adeboye, as he is fondly called, used the opportunity to urge the worshippers to always pray for the Nigerian Army so that they could help defeat all the enemies of the country.

It would be recalled that this year’s convention is tagged, ‘The All Sufficient God’ and ended with thanksgiving service on Sunday August 9 at the mission’s new camp ground situated in Shimawa Area.