Published By Gabcos - August 14, 2015
Orezi is set to take move his art further by releasing his debut album. The new LP will be titled “#The GhenGhen”…. 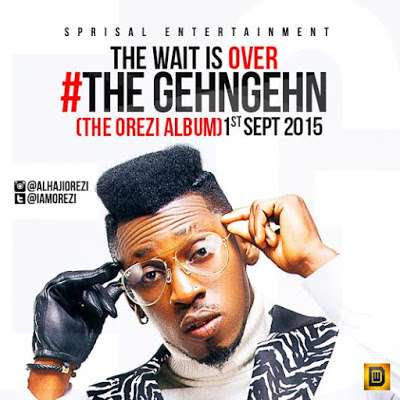 Orezi Esegine Allen popularly known as Alhaji Orezi is set to drop his debut album.
The Sprisal Entertainment singer with hit songs such as ‘Shuperu’, ‘Shoki’, ‘You Garrit’ and ‘Rihanna’ has shown immense consistency in the release of dance music over the past two years.
Orezi is set to take move his art further by releasing his debut album. The new LP will be titled “#The GhenGhen”, and will be made public on September 1.
Orezi joins a growing list of artiste who have scheduled the release of their albums in the month of September. They include Davido, Wizkid, Harrysong, Iyanya and many others.
The ‘Shuperu’ singer is confident about the impact of the album. And has revealed that his body of work will eclipse the performance of every other Nigerian album.
‘I am now ready to drop it (album) because it is hot. Every other artiste planning to drop an album in September should be advised because from September till next year, Orezi will rule the club houses, the streets and airwaves.” A bullish Orezi said.
According to Orezi, the album will cut across a number of genres inclusive of R&B, Dancehall, Afrobeat and Hip-hop. He also revealed his plans for distribution of the project.
“My fans can never be disappointed. We are working with a reputable marketer to make sure it is widely spread.”
“I am really grateful to everyone that has supported me since day one till date and I bless the name of Almighty God that maketh things come to pass. I am really grateful, and just to add, expect great and unique hit songs (RnB, Dancehall, Afro and hip hop). It is really hot,” he submitted.”