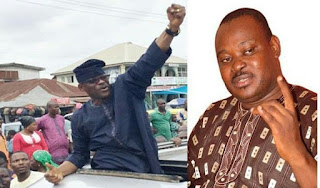 A Federal High Court judge has given a specific order asking the Independent National Electoral Commission to recognize Jimoh Ibrahim as the People's Democratic Party candidate in the upcoming gubernatorial election in Ondo state.
Justice Okon Abang gave the order to reinforce his earlier ruling in June which compelled the PDP to work with the Ali Modu Sheriff-led faction of the party as authentic party leaders relating to 2019. However, when INEC received the ruling, the electoral body noted the ruling did not mention the status of the Sheriff led PDP faction in relation to 2016 elections. The litigants approached the court to obtain an interlocutory order forcing INEC to include Ibrahim's name or face contempt.
In resolving their prayers today, Justice Abang gave the order to effect the inclusion of Mr. Ibrahim in the election as a candidate.
An INEC source told Saharareporters that substitution of candidates for Ondo closed yesterday. However, he stated the electoral body would study the order and comply with it as necessary.

The Ondo state branch of the Peoples Democratic Party has issued a statement commending the ruling
FULL TEXT OF THEIR PRESS RELEASE:

Peoples Democratic Party (PDP), Ondo Chapter
Press Statement
October 14, 2016
Jimoh Ibrahim's victory at court; Democracy is winning, Judiciary is working, Ondo begins a new dawn
Ondo State Chapter of the Peoples Democratic Party, (PDP) wish to congratulate the good people of our Sunshine State for witnessing, today the 14th of October, 2016 a victory for democracy, the triumph of truth over falsehood, Godliness over godfatherism and most importantly, the sweet beginning of a new dawn of development and good governance across the state.
We also congratulate the authentic chairman of our great party in the state, PrincePoroye Biyi Bill for his doggedness, his nonresistant fighting spirit and his stronghold to the tenet and dictate of the Almighty God in achieving this historic fate; a case of a little David killing the giant Goliath.
We congratulate our ever vibrant and goal getting candidate, Chief (Dr.) Jimoh Ibrahim (CFR) for remaining steadfast and strong will in defending the people's mandate freely given to him by over seven hundred delegates of our party at the primary held on the 29 ofSeptember, 2016.
And to all our elders, leaders, members, loyalists, well-wishers and the good people of Ondo State in keep faith with our party PDP, we thank you and solicit your support for our candidate in the forthcoming Governorship election for us to consolidate today's victory when our candidate shall be elected the governor of the state.
We salute our Judiciary, the last hope of common man, for enhancing our democracy, and rekindle our hope for better Nigeria through the instrumentality of law by correcting the wrong done by the Independent National Electoral Commission (INEC), where Mr. Eyitayo Jegede was erroneously listed as PDP candidate in place of the rightful person, Barrister Jimoh Ibrahim (CFR).
As we have always been saying that as a political party and law abiding individuals, we believe in the court of law and the goodwill of the people of Ondo State not to result in violence or any act capable of undermining our integrity as citizens of Nigeria; but to always act in the best interest of our people, our state, Ondo and dear country Nigeria.
It was a great joy for us that the court has ordered that "INEC shall accept for the conduct of Ondo state election only the nomination of Jimoh Ibrahim for Ondo state election for PDP."
The presiding Judge of Federal High Court, Abuja, Justice Abang when delivering the judgment that authenticated the candidacy of Dr. Jimoh Ibrahim for PDP in the Septemeber 26  2016 Ondo State Governorship Election said; "I held a while ago there is no application in the court file brought to my attention, and while going through the court record I found in the court file a counter affidavit of the second respondent INEC dated Oct 12, 2016.
"It is, therefore, mean that INEC did not challenge the prayers of the judgment creditors. INEC is bound to accept the Nomination of the creditors. I so hold.

"INEC counsel did not inform the court on the June 29th, 2016 the day of the judgment of any other judgment that set aside or altered this judgment. To do otherwise than publish the name of the creditor's candidate will be unlawful," Justice Abang ruled.
We, therefore, urge the people of our Sunshine state to diligently await the homecoming of our candidate and the man God Himself has ordained and appointed as the next governor of the state, where he shall visit every unit, ward and local government in an unprecedented campaign trail, preaching message of love, oneness, selfless service, developmental strides, human and infrastructural development, wealth creation, educational growth, economy buoyancy and giant stride in Agriculture. Congratulations, Sun shiners.
Signed:
Yemi Akintomide
Director of Media/Publicity
PDP, Ondo State