Checkout Out The Feet Of A Asian Woman That BROKE THE INTERNET!!(PHOTOS) 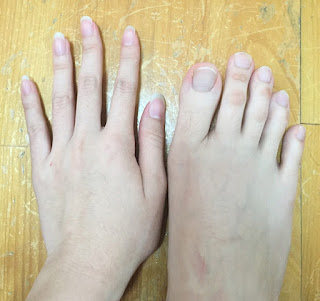 A Taiwanese woman is driving the internet crazy after posting pictures of her very unique feet.

Her pictures, which first appeared on an online community for university students in Taiwan, leaves millions of web users puzzled over whether they are fingers or toes.

Though the unidentified woman claims that she's only 4' 11" tall, one of her lengthy toes is an impressive 5cm long!

She says the unusual characteristic has caused some ridicule.
"Since my childhood, I have always drawn attention whenever I wear flip-flops. Some people would ask me to use my 'four hands' to climb a tree."

"When I was young, I thought they were normal toes. When I first saw other people's toes, I thought 'how come their toes are so short?' As I grew up, I realized I was the bizarre one after all."


She added that both of her parents have long toes and they're a great help when she has to tiptoe.