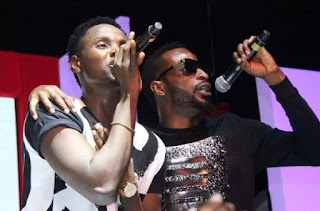 In Koffi's long instagram message, he said Kiss Daniel was a carbon copy of the singer ”9ice”, who lost out in his career because he was very proud.

In an interview with #KinGabcosPress, 9ice reacted to the Instagram diss, as he defended Kiss Daniel.
9ice, while laughing at the comment, said he has been in the game for almost 22 years, citing that its not all about the age, but maturity.

According to Mr 9ice, “Sometimes it’s not by age. When you’re old, doesn’t mean you’re sensible. You can be 40 and still be immature, I won’t say more than that.”

Recall that Koffi launched a social media attack on Kiss Daniel via his page, by releasing a lengthy post, where he also took subtle jabs at other celebrities which include MI Abaga, Ice Prince, 2Baba, D’banj and Oritsefemi.