Sports: Cesc Fabregras Vows To Fight On For Antonio Conte. 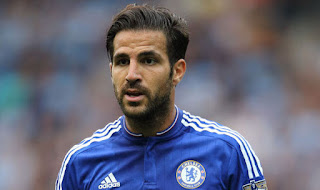 Spanish Midfielder Cesc Fabregras has denied ever wanting to leave Chelsea despite limited game time since Antonio Conte took over.

The former Arsenal and Barcelona man has only played 32 minutes of the Premier League football this season, but was in action in Tuesday’s EFL Cup win over Leicester City.

29 Year old Cesc Fabregras took the opportunity to remind Conte of his qualities by scoring a B.race, including the match winner in extra time.

“I’m tired of the news that says that I’m offering myself to other clubs. I’m one more of the team and I will keep fighting to play here,” Fabregas told Cadena COPE.

“I spoke with Conte. We like him very much, he’s a great coach, very hard and he says the things very clear. We are very happy with him.” He added.

As for speculation that La Liga's giants - Real Madrid were keen on his services, Fabregras refuted the claims and insists he is ready to stay in London and fight for his place.

“I never planned leaving Chelsea,” Fabregas added. Real Madrid? Maybe or not hey called me, but I didn’t think to leave Chelsea, not even for a second.”