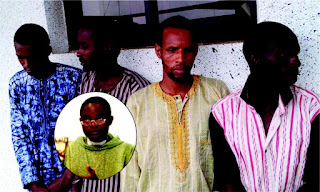 The suspected killers of the Vicar General of the Catholic Diocese of Otukpo, Benue State, Rev Father John Adeyi, have pleaded with the Benue State government to tamper justice with mercy.

The suspects, who were paraded yesterday, admitted that the cleric did nothing to them before they killed him, claiming that the he was already destined to die.

#KinGabcosPress gathers that the killer squad begged the state government as well as the police to forgive them.
The gang leader, Gina said, “He did not do anything to us, and I think his death was destined. We killed him after collecting ransom from his family because vigilante and villagers were closing in on us, so we killed him"