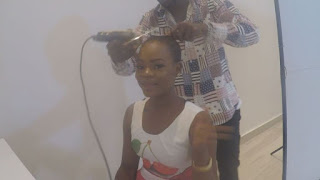 Shutting down all claims that she was used by big corporations for gain and tossed aside, Olajumoke Orisaguna hits the news again.

Today, TY Bello took to her Instagram to reveal Jumoke’s latest project, and according to her, she is working with the beautiful Model on an art project, and she then noted the details of the photo shoot they had already done. She said, “We decided to try a close crop with her hair and she carries it so well. The photos are magnificent".

This comes just days after a social media uproar started on social media by folks who claimed that the model had been used and dumped.

Among the voices that asked for the Mum-of-two’s whereabouts was Nollywood filmmaker, Charles Novia.

Many fans of TY Bello/Olajumoke reacted after seeing her resurfaced again.
See Screenshots Below.