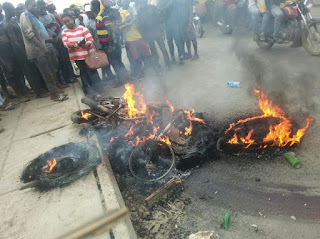 An Okada Rider was burnt to death today by an angry mob, over his involvement in a robbery at Finger bus-stop area of Badagry Expressway, Lagos State.

While he was narrating what happened, an eyewitness said the bike man was shot while he was trying to escape with his accomplice after a robbery.

He said, "He was running along the road and he jumped on the bike waiting for him. Unfortunately for them, Police around chased them, fatally shooting the bike man in the process."
An angry mob reportedly descended on the robbers afterwards, burning the bike man while the Police left with the armed accomplice."
See More photos below...