Dont Fall Victim! He Is A WANTED Scammer!! (Pictures Attached) 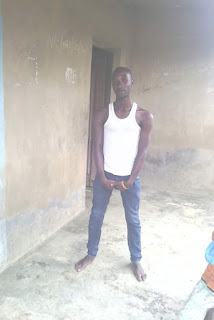 The picture above is that of a "Mr Ojo." A man of about 27 years, who has been into scamming since last 5 years.
In the year 2011, Mr Ojo was caught after scamming a man in his area of about 8million naira, he lied to the man that he is an international business man, afterwhich the man sent him some money,
After the transaction, Mr Ojo stopped using his mobile phone.
Later on,  (after few months), Mr Ojo was caught and he was made to pay a fine of 9million naira for his bail.
The Nigeria Police has again declared Mr Ojo wanted, So anyone anyone who knows him can report to give the police officers details so he can be arrested.