Checkout what was spotted in Ilorin Today. 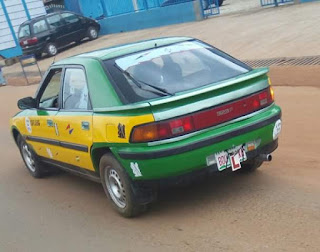 According to a Facebook user who shared the picture above, this commercial taxi driver who is meant to be a professional driver was spotted working with a learner's logo.

According to the Facebooker who saw the driver in Ilorin, Kwara State, he was surprised that, a Commercial Taxi Carrying Leaner Emblem will be allowed to operate.
He wrote..."Saw this and took this picture myself today in Ilorin, the Kwara State Capital, a commercial taxi carrying "Learner".... Wonder they say shall never end!"
Is this not risky??