"Stay Away From Zahra, You Can't Marry Her" Buhari Sternly Warns Gov. Yari. 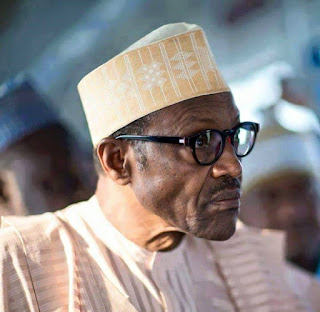 President Mohammadu Buhari has given a stern warning to  Zahra his daughter, to stay away from Governor Abdulaziz Yari of Zamfara State who has made several moves to marry the pretty daughter of the President, sources told #KinGabcosPress.
Governor Yari is currently at the UN Millennium Hotel, New York, where the President and his families are lodged as a member of the Federal Government’s delegations to the United Nations General Assembly.

Governor Yari claimed in his biography that he was born January 1, 1969, while Zahra turned 21 on the 18th day of December, 2015. Governor Yari who is said to be desperately interested in marrying Zahra to boost his political chances is using the opportunity of the U.S trip to fine tune his marriage plans and sending emissaries to persuade the President to rescind his earlier stonewalling.

#KinGabcosPress learnt that the Zamfara Governor has gone as far as dolling out gifts to the first lady and other members of the Buhari family.

He is also alleged to have funded the First Lady’s recent Hajj trip to Saudi Arabia with $1million.

Governor Nasir El-Rufai of Kaduna State had also earlier been rumored to be interested in the President’s daughter.

As a part of his moves, He(Yari)  has enlisted the husband of Halima, elder daughter of Buhari, showered him gifts including awarding him contracts in Zamfara state to persuade the first family into accepting his overtures to marry the President’s daughter who just graduated from a British University.

“He has not only been using Halima’s husband, he has also reached out to Zahra's mother (The first lady) and showered her with several gifts including money when she was going for the Hajj... (The First Lady is playing along, I'd say) Governor Yari’s desperation to marry Zahra has once been a subject of discussion in Gusau Government House, where senior officials condemn the Governor’s desperation.

A Government source told #KinGabcosPress that, in spite of the lean resources of the Governor, he makes available cash gifts running into several millions to the First Lady, Halima’s husband and other members of Buhari’s family in a bid to have them convince President Buhari who has frowned at the Governor’s antic.

“Things are not going well here in Gusau. The story is everywhere and we are particularly not happy with the fact that state resources have now been committed into wooing the President’s daughter. It is very embarrassing the way the Governor is going about it" an official at the Government House, Gusau told
#KinGabcosPress.

The source who shares family relationship with the Governor said the only stumbling block is the President who has given a stern warning to his daughter to stay away from Governor Yari. “The President wants his daughter to marry someone not as old as Governor Yari,” according to the source.
Sources told Pointblanknews.com that the Governor argued that the President does not have the moral right to reject his overtures to marry Zahra on account of age because Buhari is over 30years older than Aisha.

The Zamfara Governor is notorious with Political Marriages. His third wife is the daughter of Umaru Shinkafi, a popular Politician in Zamfara State. Yari married her to get political blessings for his Governorship ambition.

“Yari is a politician who wants to survive at all cost. He married his third wife, the daughter of Shinkafi and got the support of the people of Zamfara because of Shinkafi. Shinkafi is dead now and the people are not happy with him so he wants Buhari’s daughter because that is what may guarantee him survival in 2019,” a source close to the Governor said.

Sources also informed #KinGabcosPress that Yari is eyeing the Presidency or a Senate seat in 2019, and would need to solidify his base by marrying the daughter of the President to edge out any opposition.

A source in Gusau said, "Governor Yari has taken over from Senator Sani Yerima whose relationship with President Buhari has waned."

Governor Abdulaziz Yari, who runs a haulage business in Washington DC and hardly stays in Nigeria, allegedly collected over N400million from the state coffers without appropriation by the State House of Assembly to entertain President Mohammadu Buhari’s visit to the state in July, 2016.

His incessant absence from Gusau has almost grounded Government activities and politicians are currently ganging up against him.