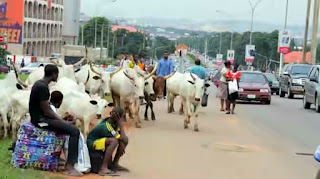 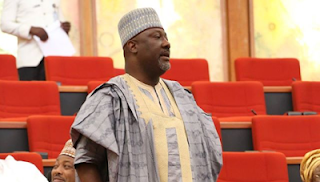 The Senate Committee on FCT, worried by continuous movement of cows in the City Center despite several warnings by the Federal Capital Territory authorities, has ordered that any Cow(s) found in the City center be slaughtered.

The directive was handed down to the  Alhaji Mohammed Bello, Minister of Federal Capital Territory, when he appeared before the Committee on Monday.

Committee Chairman, Senator Dino Melaye, in his speech,  registered the Senate’s disappointment at the manner Fulani herdsmen defy the order that they should not move their cows in the capital city, insisting that the Minister under a must, carry out Senate’s position on that.

According to him, “Honorable Minister, Senate as an institution is not happy at how Fulani herdsmen continue to move their cows across the city center, which we are aware you have given directive against that some time ago.”

“From now, get knives and ask your men to slaughter cows found in the capital city or prosecute herdsmen seen with cows in the city center with a fine of N50,000 per cow. This order must be carried out,” Dino added.

Dino further said that, the Senate had gathered complaints that, some residents of the territory were converting their apartments into hotels and brothels, a situation he said was distorting original master plan of the city.

He also noted that, some people were already undermining FCT's authority under his watch which he said was unacceptable.

Meanwhile, the hearing of the FCT officials and Nigeria Military who appeared before the committee led by Dino Melaye over unconstitutional acquisition of 238 hectare of land situated at Maitama extension could not continue.

In response to the Committee’s demand that the said plot was being investigated based on petitions it received from the public that Nigeria Military had chased away FCDA contractors who were working on infrastructure earlier in the months, the minister pleaded that FCDA should be allowed to discuss with those concerned, believing that, they would revert to the Senate.

Major General Pat Ake who appeared on behalf of the Chief of Army Staff corroborated that Nigeria Military was capable of resolving the impasse with FCDA, maintaining that, they were ready to comply with the outcome.