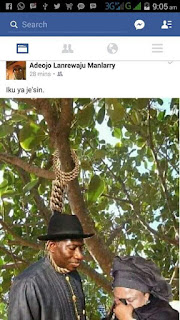 The hate speech directed at former President Goodluck Jonathan during his time in office may have stopped from the leaders of the then, opposition party, the All Progressives Congress, APC, but some of their online minions seem to have not got the memo that the elections are over and the party is now in power.

One of such misguided elements is identified as a Nigerian police sergeant with a Facebook name, Adeojo Lanrewaju Manlarry. He identifies as a sergeant and prosecutor of the Nigeria Police Force on Facebook.

According to political activist, David Shuaibu, Mr. Adeojo shared a horrific photo of Dr. Goodluck Jonathan hanging from a tree, lynched with a weeping Dame Patience Jonathan be his feet. The photo is so terrible that we will not share it on this article. You may, however, view it HERE. (Warning: Viewer discretion is advised).

This is what Shuaibu wrote on his Facebook wall along with screengrabs of the offensive photo and the hashtag, ‪‪#‎ArrestSackAdeojoLanrewajuNow‬.

“Citizens, see what a serving Nigeria Police officer posted on his Facebook timeline.

“No weapon fashioned against Goodluck Jonathan prospered, if not, this police sergeant Adeojo Lanrewaju Manlarry would have out of hatred, professional misconduct, and disloyalty killed the former president in the name of ‘accidental discharge’.”

The police officer appears to have removed the offending photo following a citizen backlash.

The activist’s Facebook post is now gaining traction with calls from Nigerians for Adeojo to be arrested by the Nigerian secret police, the Department for State Security Services, DSS, because the image is widely interpreted as a death threat against the former president of Nigeria. Especially, in the United States of America where it is reminiscent of racist public lynchings of black people by white during the slave era.

Dr. Goodluck Jonathan has alerted the world to a plot to assassinate him by elements unhappy with his work to build a peaceful Nigeria.

On Wednesday, August 17, 2016, the news of the arrest of a trader in Ogun State broke and went viral. His alleged crime? Buying a pet dog and naming it Buhari. The Nigerian police claims that “one mallam” reported the 30-year-old citizen for naming his dog a common Nigerian name.

“The man bought a dog and inscribed Buhari on both sides of its body,” Abimbola Oyeyemi, an assistant superintendent of police and spokesperson for the Ogun State Police Command told Vanguard.

“One Mallam lodged a complaint and when our men got there, we found out that it was true.

“You know such thing can cause serious breach of the peace and ethnic or religious unrest. We are charging him to court for conduct likely to cause a breach of peace.

“He was arrested last Saturday and we are taking him to court later today (Tuesday) or tomorrow morning (today). You know an average Northerner will feel bad over such a thing.

“It can cause serious ethnic crisis or religious confrontation because when you are relegating such a name to a certain person, you are indirectly insulting him,” Opeyemi concluded.

If the Nigerian police could view the freedom of a man’s expression so seriously. We await their reaction to such a high level of misconduct by one of its officers.

We have alerted to spokesperson of the Nigeria Police Force to this development. We are awaiting the police’s response.