I Substituted Mata Because He Was The ‘Smallest Player’ – Mourinho 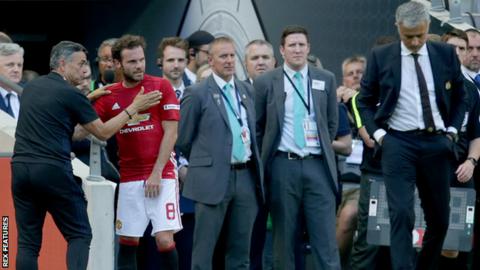 Substitute Juan Mata was
replaced in Manchester United's
Community Shield win "because
he was the smallest player", boss
Jose Mourinho said. Mata,sold by
Mourinho to Unitedwhen at Chelsea, looked unhappy tobe
taken off 30 minutes after
coming on in the 2-1 win over
Leicester Cityat Wembley. "I needed to take off the
smallest player because we
were expecting alot of long
balls," Mourinho said. But BBC pundit Danny Murphy
said the decision was
"embarrassing" for Mata. "You don't do that unless you
are trying to send a message,"
ex-England midfielder Murphy
said.
"They have a lot of history at
Chelsea and he has embarrassed him in front of
his supporters and his family.
"He is basically saying to him
you are not important and he
has done it publicly. I can't see
him still being at the club at the end of August." Midfielder Mata, who is 5ft 7in
tall, was sent on in the 63rd
minute in place of goalscorer
Jesse Lingard, with the score
1-1.
He was replaced 10 minutes after Zlatan Ibrahimovic's 83rd-
minute winner by 5ft 10in new
signing Henrikh Mkhitaryan.
Mourinho put his arm around
Mata when the Spaniard came off
three minutes before the final whistle but the former Valencia
player looked unimpressed.