A Nigerian And A Romanian Arrested For Drug-Trafficking In Cambodia 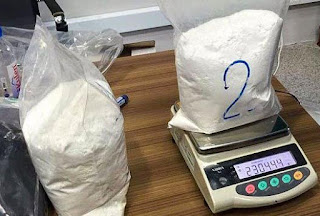 Two foreign nationals – a Romanian and a Nigerian – will be sent to Phnom Penh Municipal Court today on charges of drug trafficking after police alleged the pair tried to enter the country with more than five kilograms of cocaine from Brazil.


After interrogating him, police searched for and arrested Chukwue Meka, 35, who they say was in charge of smuggling the cocaine from Cambodia to Thailand.


Lt. Gen. Chito said his office worked with the US Drug Enforcement Administration to catch the two men before the drugs could be transported to another country.


“We were informed from an international organization that there was a suspect involved in drug trafficking who departed from Brazil and was coming to Cambodia,” he said.


“We seized almost five kilograms of cocaine,” Lt. Gen. Chito added. “This drug was transported from Brazil and the traffickers would use Cambodia as a transit country, before being sent to Thailand. The cocaine is from Colombia.”


Lt. Gen. Chito said the ringleader of the operation is still in Brazil, and police were looking for other people who may be involved in the drug ring. Both men will be sent to court today.


Cambodia is often used as a transit point for drug traffickers in Asia due to its less-than-stringent airport checks compared with other countries. In late March, a 22-year-old Thai woman flying from Qatar was found with 2.6 kilograms of cocaine hidden in a chocolate container.


In all, police seized about 20 kilograms of drugs from the man, who claimed he had smuggled most of it from Laos earlier this year.